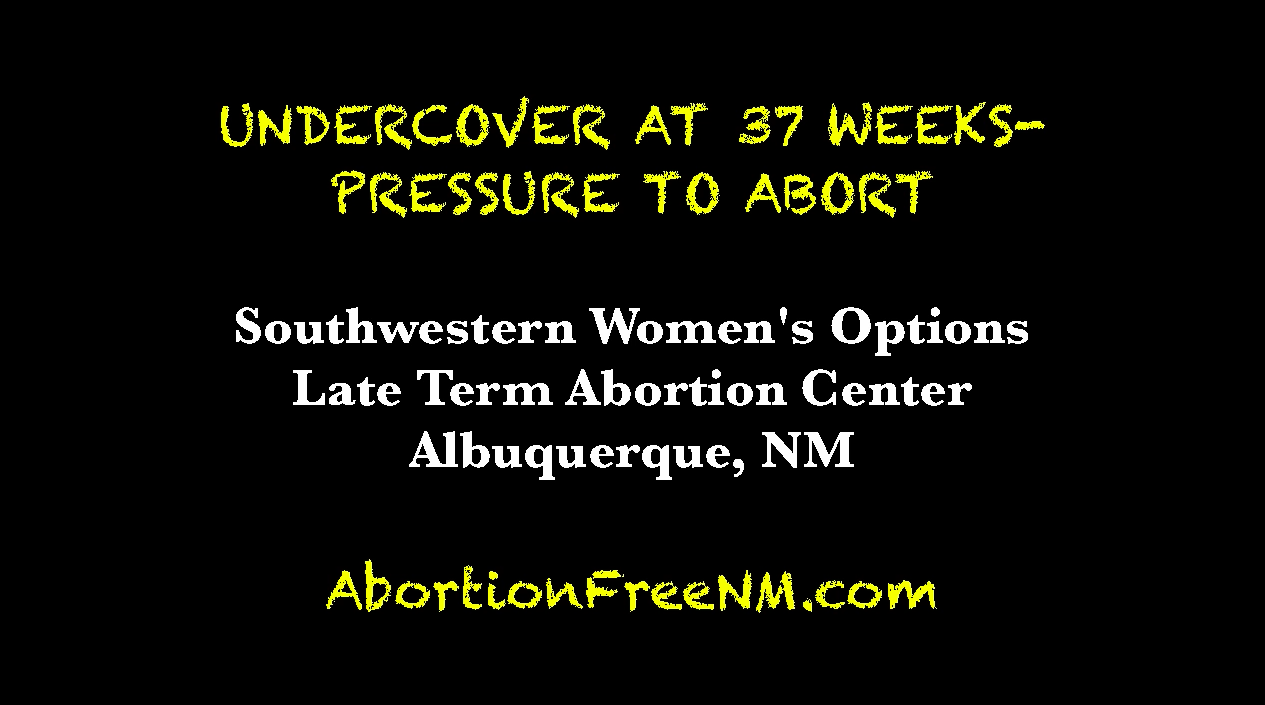 Under our latest initiative, Abortion Free New Mexico we are working to raise national awareness about Late Term Abortion.

New Mexico is the land of unrestricted abortion. There are no limitations on when abortions may be performed and late term abortionists at Southwestern Women’s Options have capitalized on the state’s lack of protection for human life…

Abortion Free New Mexico released an undercover video that gives a rare look from inside the nation’s largest late term abortion facility, Southwestern Women’s Options. This video is 5 minutes long and combines raw footage of dialogue with clinic staff and also exclusive interviews with the undercover investigator detailing her unique account of what it was like to go inside of a late term abortion center while pregnant at 37 weeks gestation.

Church Militant wrote up an extentive report about this latest project and an exclusive profile piece about our work over the past 7 years here in Albuquerque, New Mexico…

In Abortion Free New Mexico’s latest undercover project that has taken viewers inside the notorious Southwestern Women’s Options (SWO) late term abortion facility, the investigation has also uncovered that the University of New Mexico (UNM), a publicly funded institution, is willing to collude with late term abortionists to deliver dead babies at UNM Hospital once a deadly injection is administered by abortionists at SWO.

Abortion Free New Mexico is working with Priests for Life and together we have released 36 undercover video’s exposing late-term abortion in the Late-Term Abortion Capital of America: Albuquerque, New Mexico…and ALL ACROSS AMERICA:

As former interns with Operation Rescue, Bud and Tara Shaver have learned the most cutting edge tactics and research techniques to document conditions and practices permeating the New Mexico Abortion Industry. Since arriving to Albuquerque in 2010, they have worked tirelessly with Operation Rescue to document, uncover, and EXPOSE the New Mexico Abortion Cartel.

Botched abortions results in a medical emergency at UNM Center for Reproductive Health. UNM Medical Center uses this abortion clinic to train residents there to do abortions. It is funded, in part, by the public.

For more information, read the groundbreaking report by Tara Shaver, “Tax Funded Abortion Training and the Betrayal of True Medicine at UNM”

An undercover call to the UNM Center for Reproductive Health and documents obtained through open records requests shows that New Mexico taxpayers are spending millions of dollars through Medicaid on gruesome and expensive abortions after 20 weeks gestation.

Read more about this undercover investigation and discover the fact that 92% of babies who are diagnosed with down syndrome in the womb are killed by abortion.

The caller identified herself as having a healthy pregnancy in the 26th week of gestation to a Southwestern Women’s Options employee named Sue. She told Sue that the reason she wanted an abortion was because her husband had just lost his job.

First of four 911 calls in 15 months made from Southwestern Women’s Options (SWO), a late-term abortion mill in Albuquerque, NM requesting transport for botched abortion patients. This shows that this abortion clinic presents a danger to the public.

This 911 call reveals a botched abortion at Southwestern Women’s Options (SWO) abortion mill in Albuquerque, New Mexico on February 19, 2011. The call was made in the middle of the night. The condition of the woman is not known. Abortion may be legal but it is far from safe!

The woman suffered a life-threatening ruptured uterus during a late term abortion at 35 weeks. The condition of the woman is not known. Life-threatening abortion complications happen in ABQ at the shocking rate of ONE every THREE months.

This is the 14th medical emergency since November, 2008.

Here is another documented injury sustained at SWO: Ambulance Transported Another Sella Patient to Hospital Moments Before Board Dismissed Negligence Charges

Video of ambulance transporting 17th known woman to ER in Albuquerque, NM. New Mexico has no minimum safety standards for abortion facilities. This represents the seventeenth documented botched abortion at that facility since 2008.