New Mexico Receives The Most Federal Tax Funds, Uses It to Fund Abortions 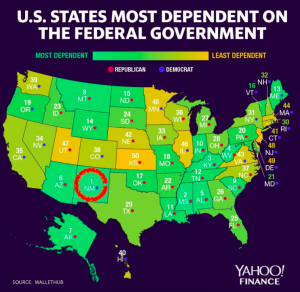 BREAKING: Curtis Boyd Under Investigation by New Mexico Medical Board

“We commend Tara Shaver and Abortion Free New Mexico for their diligent work in documenting this abortion patient death and the suspicious circumstances that surrounds it. The fact that the very liberal NMMB is pursuing an investigation into Boyd’s possible violations of the Medical Practice Act validates Shaver’s concerns and ours about his negligent conduct,” said Newman. “Keisha Atkins deserves justice and her family deserves closure. We are cautiously hopeful that this new investigation will accomplish both.”

Congressman Steve Pearce who is running unopposed on the Republican ticket for Governor of New Mexico in 2018 issued the following statement,

“New Mexico Medical Board has officially launched an investigation into Curtis Boyd, owner of Southwestern Women’s Options, following the death of an Albuquerque woman who suffered from complications during a late term abortion. This investigation into Boyd, who performed the abortion, is rightfully happening after much delay. I have been in the fight to uphold the law and protect freedoms and liberties of women in New Mexico and across the nation. No one is above the law, and it is time we hold those accountable for their wrongful actions.”

Abortion Free New Mexico released an undercover video that gives a rare look from inside the nation’s largest late term abortion facility, Southwestern Women’s Options. This video is 5 minutes long and combines raw footage of dialogue with clinic staff and also exclusive interviews with the undercover investigator detailing her unique account of what it was like to go inside of a late term abortion center while pregnant at 37 weeks gestation.

Church Militant wrote up an extentive report about this latest project and an exclusive profile piece about our work over the past 7 years here in Albuquerque, New Mexico…

In Abortion Free New Mexico’s latest undercover project that has taken viewers inside the notorious Southwestern Women’s Options (SWO) late term abortion facility, the investigation has also uncovered that the University of New Mexico (UNM), a publicly funded institution, is willing to collude with late term abortionists to deliver dead babies at UNM Hospital once a deadly injection is administered by abortionists at SWO.

In 2016 we filed a formal complaint with the New Mexico Nursing Board against Vivianne Clark. Clark is a Registered Nurse, license number RN-71112 who is employed by Planned Parenthood of New Mexico. 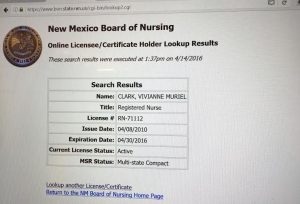 New Mexico law states that only licensed physicians can perform abortions. Vivianne Clark is not a licensed physician and is therefore in violation of New Mexico’s Criminal Abortion Statute, NMSA Section 30-5-1, et seq.  Medicaid data obtained through a public records request indicates that since 2012, New Mexico taxpayers have footed the bill for over 200 illegal abortions performed by Vivianne Clark.

In 2013 alone Vivianne Clark performed 91 illegal abortions and was paid over $11,000 from New Mexico Medicaid. Clark has been reimbursed by New Mexico medicaid from 2012 through 2015 for abortions she performed in the first and second trimesters, up to 24 weeks of pregnancy.

As we move forward with our latest initiative, Abortion Free New Mexico we will continue our work uncovering and documenting abortion abuses at Southwestern Women’s Options with the immediate goal of holding it accountable for the crimes we believe it has committed and seeing this abortion business closed. 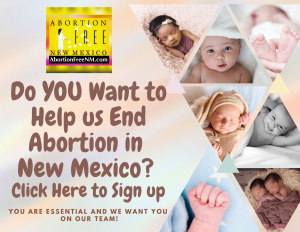 Please familiarize yourself with the information contained in these links and share this information with others!

Tara Shaver, who trained with Operation Rescue for a year in Wichita, obtained records of over a dozen 911 calls placed from Southwestern Women’s Options (SWO) showing gross life-threatening complications, including a ruptured uterus during a 35-week abortion. Tara also discovered that state tax dollars pay for these late-term procedures at the cost of thousands of dollars each. She also obtained a consent form from SWO, in 2012 from a woman injured from a late term abortion, where the abortion business admits that abortions after 18 weeks are more dangerous than live birth, which is contradicts the usual pro-abortion talking points.

“The risk of terminating a pregnancy gradually increases throughout the course of pregnancy. These comparative risks become approximately equal at 16-18 weeks of pregnancy and increase so that pregnancy termination at 18 weeks and above involves a greater risk than carring the pregnancy to term.”

​In July 2015, Protest ABQ filed a formal criminal complaint with the Attorney General of New Mexico and two consent forms, one obtained by Pro-Life Witness from 2012 and a newly obtained consent form, which was obtained by Protest ABQ,  this year 2015 from Southwestern Women’s Options (SWO) were submitted as proof of their using aborted baby body parts in medical research.

BREAKING: Southwestern Women’s Options is currently under criminal investigation by the New Mexico Attorney General for being the SOLE provider of baby body parts to the University of New Mexico for experimental research.
Below is the 2015 consent form that you can view for yourself and feel free to download, print and share it with others. Also we have compiled several reports, undercover investigations, and video’s.

“A shocking number of medical emergencies at two Albuquerque abortion clinics over the past few months have raised questions about clinic safety and who is responsible for oversight. After months of investigation, pro-life groups have determined that abortion clinics often operate in regulatory gaps and actively seek to “fly under the radar,” as one regulator put it. This has created a public safety crisis in New Mexico.”

“The State of New Mexico has one of the highest poverty rates. Money that could go to alleviate poverty has instead been dished out to abortion providers to the tune of over 1.1 million state tax dollars in 2011 to fund abortions through Medicaid.” Click Here to read the full report.

“An undercover investigation of the Southwest’s largest so-called “women’s clinic” has revealed that the purpose of this clinic is not to provide women’s healthcare at all, but to sell women one product – abortion. In fact, abortion, is the only option given to women at the misnamed Southwestern Women’s Options in Albuquerque, New Mexico, is abortion.” Click Here to read the full report.

This money is used for the following purposes:

Exposé: Part 2- Lobos of Death: A Look at the Radical Abortion Agenda at the University of New Mexico 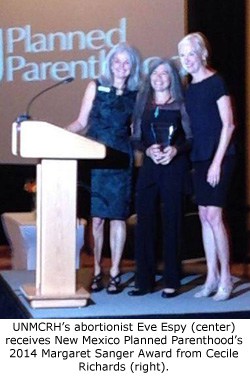 “The University of New Mexico (UNM) is at the heart of the abortion industry in the Land of Enchantment. During our four years of work in Albuquerque, the home of the Lobos, we discovered that the abortion culture is deeply entrenched at this publicly-funded institution and expanding – all at taxpayers’ expense. Little can New Mexico afford to pour hundreds of thousands of hard-earned tax dollars in to UNM’s abortion business. It is one of the poorest states in the nation, ranking Number 1 for child hunger and Number 2 for adult hunger according to the Huffington Post. In 2013, New Mexico ranked last in the nation for child well-being, climbing only one spot to 49th in 2014.” Click Here to read the full report.

“The recorded phone conversations with both abortion clinics showed employees encouraging a prospective patient to use Medicaid to pay for an expensive 20-week abortion, even though on one case, the caller indicated that she had a “good job” and did not believe she would qualify for the program.” Click Here to read the full report.

“Since 2008, New Mexico’s abortion rate has been on a steady decline. This is great news in a state where abortions are performed through all nine months of pregnancy without restriction. However, that news is tempered by the fact that abortions funded by tax dollars are on the rise.”

“If one was to ask the average American if abortions at 35 weeks were legal in the U.S., most would say they were not. However, a disciplinary case playing out on Albuquerque, NM, reveals that not only are these full term abortions legal in this state, but that they are extremely dangerous and conducted by abortionists that routinely ignore the standard of care in order to do these extremely lucrative abortions, some of which cost in excess of $10,000.”

“According to Life Dynamics’s report, “Racial Targeting and Population Control,” New Mexico has the highest per capita Hispanic population of all 50 states. Pro-abortion organizations like Planned Parenthood, Young Women United and even the University of New Mexico have exploited this demographic in the worst possible way by targeting them for elimination by abortion.”

“The Planned Parenthood employee tells the young woman that she and the doctor will discuss these issues but that the clinic “probably won’t” report her circumstances, even though her pregnancy by an adult qualifies as statutory rape.”

Can Women Trust Planned Parenthood With Their Healthcare?

Gosnell-Like Abortion Practices are Business as Usual in New Mexico

“The horrific crimes that took place at Kermit Gosnell’s abortion clinic have put a spotlight on the barbaric act of late-term abortion. However, the crimes committed in Pennsylvania are not isolated incidents. In fact, New Mexico provides no restrictions whatsoever on abortion.”

A new abortion facility in Las Cruces, NM, operated by the Texas-based Whole Women’s Health abortion chain, was caught “red-handed” operating without a valid business permit in an area that may not be properly zoned for that business. Seeking to avoid safety standards in TX that shut down two of its five TX abortion centers, Whole Women’s Health targeted NM where an absence of abortion laws allows even the most disreputable to run abortion businesses without fear of inspection or oversight. Click Here to read the full report.