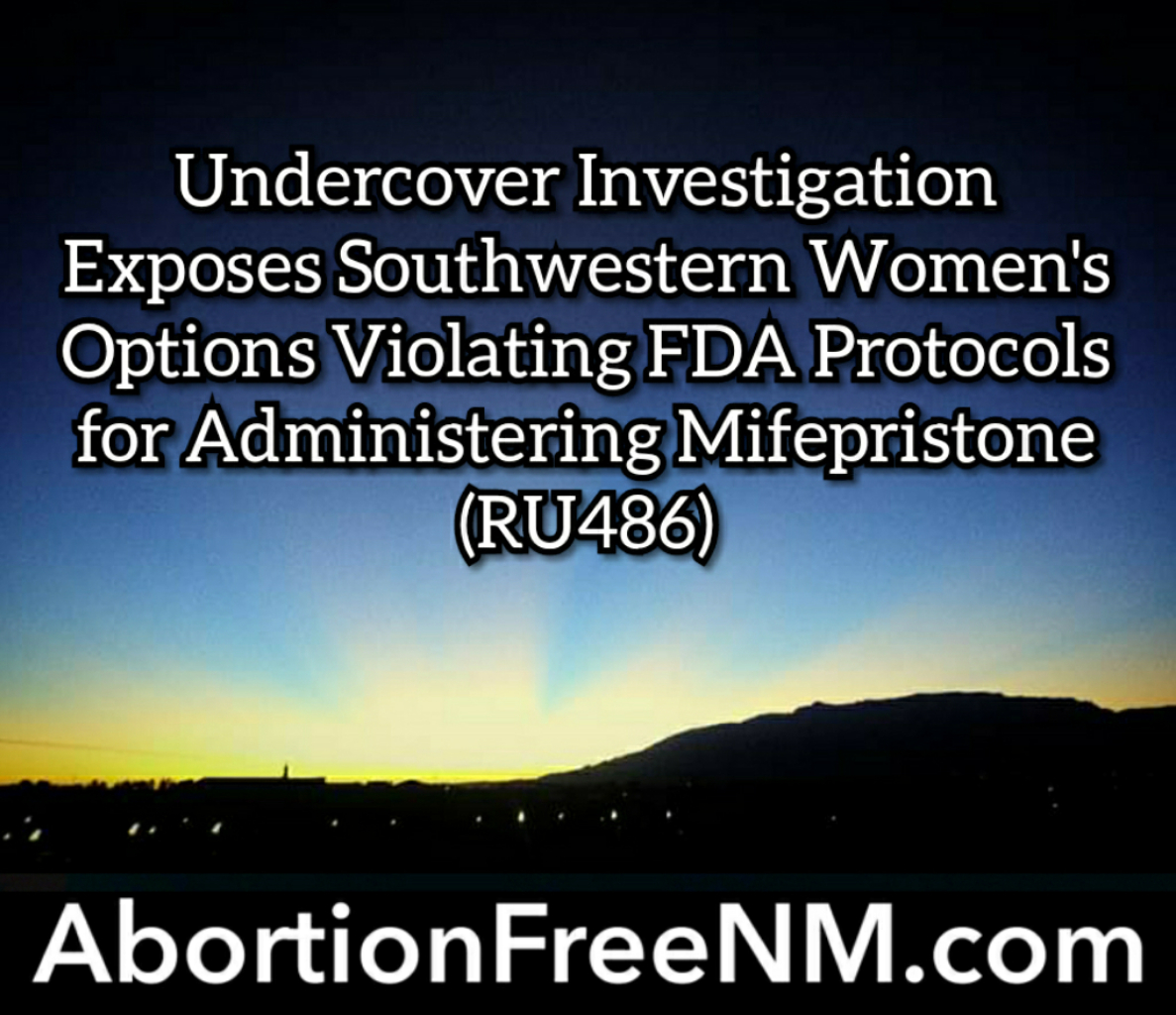 Albuquerque, NM- Abortion Free New Mexico has filed a complaint against four Albuquerque abortionists who operate at the notorious late term abortion facility, Southwestern Women’s Options (SWO) with the Food and Drug Administration (FDA) and other federal and state agencies regarding a violation of the Risk and Evaluation and Mitigation Strategies (REMS) and prescriber agreement for the drug Mifeprex, also known as Mifepristone and the RU486 abortion pill. The abortionists include Curtis Boyd, Shelley Sella, Carmen Landau and Shannon Carr.

In a second undercover investigation conducted this month, Abortion Free New Mexico called Southwestern Women’s Options to determine whether or not they are compliant with the prescriber agreement required by the FDA to prescribe Mifeprex (Mifepristone).

Risk and Evaluation and Mitigation Strategies (REMS) are required by the FDA, for the use of certain medications that carry a significant risk or, in the FDA’s own language, have inherent “serious safety concerns,” in order to mitigate some of that risk. As of December 31, 2018, there have been 24-reported  deaths connected with Mifeprex (Mifepristone) use. Two of these deaths were attributed to ectopic pregnancies resulting in death.

Abortion Free New Mexico consulted a local OB-GYN about what should be done when caring for a patient with an ectopic pregnancy and continuity of care is at the top of the list. However, in a previous investigation,  Tara Shaver exposed that Southwestern Women’s Options doesn’t provide ongoing care for their patients, the only service they provide is abortions.

When asked whether or not annual well women’s exams like pap smears are offered, the answer was, “No.” When asked if they screen for sexually transmitted diseases, the answer once again was no.

“When a woman goes for an abortion at Southwestern Women’s Options, the abortionists are getting paid to do one thing, kill the baby, period. Curtis Boyd, Shelley Sella, Carmen Landau, and Shannon Carr named in our FDA complaint are not interested in providing ongoing legitimate OB-GYN healthcare because once the baby is dead then their job is done, but in the process many things related to the woman’s health can be missed or overlooked. An ectopic pregnancy is one of those life threatening complications that no-one suspects and that requires rigorous continuity of care including, ongoing blood serum monitoring and medical intervention if needed. Women going into Southwestern Women’s Options simply are not going to receive this type of quality health care,” stated Tara Shaver, spokeswoman for Abortion Free New Mexico.

Through the course of this investigation SWO has also been found to be in violation of an additional FDA protocol by prescribing Mifepristone up to 11 weeks, which is 77 days gestation according to their website.

Mifeprex was only approved by the FDA to be administered up to 70 days gestation. This additional violation of FDA protocol by the abortionists at Southwestern Women’s Options has also been included in the formal complaint filed by Tara Shaver of Abortion Free New Mexico.

Mifeprex was only approved by the FDA to be administered up to 70 days gestation. This additional violation of FDA protocol by the abortionists at Southwestern Women’s Options has also been included in the formal complaint filed by Tara Shaver of Abortion Free New Mexico.

According to AbortionDocs.org there are 237 abortion pill clinics across the United States that are exclusively prescribing Mifeprex.

Abortion Free New Mexico has sent the information contained in our complaints to the U.S. Department of Health and Human Services and we call upon the Trump administration to do a thorough investigation to see if these abortion pill mills nationwide are  in violation of FDA protocols for prescribing the dangerous abortion drug Mifepristone.