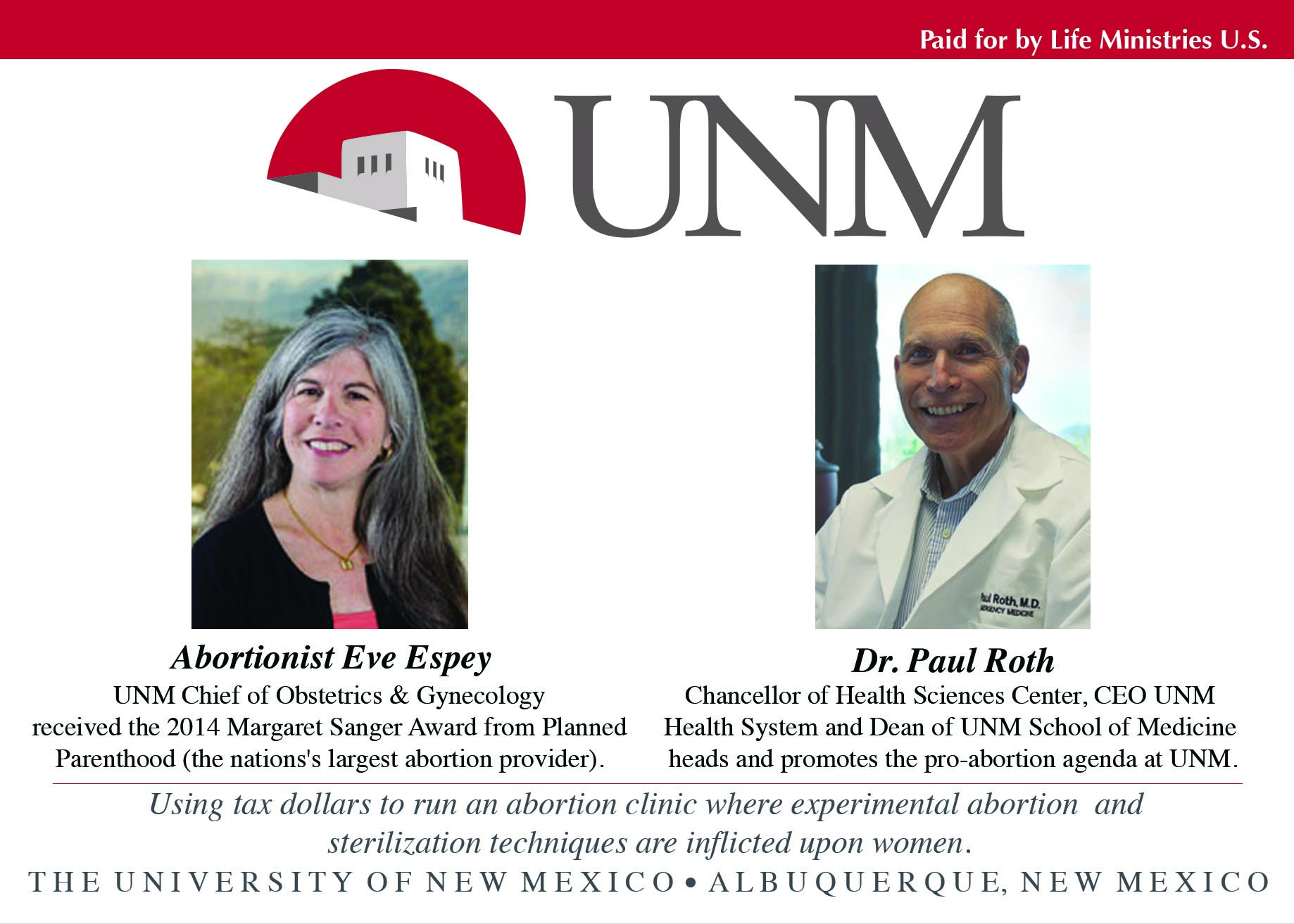 Albuquerque, NM- The Select Investigative Panel on Infant Lives has issued 12 additional subpoenas to fetal tissue procurement organizations who continue to refuse full compliance with the panels investigation into the practice of fetal tissue harvesting and the use of the remains in research. According to the NY Times, “Committee investigators say they have uncovered evidence of possible illegal profiteering, questionable consent forms and inappropriate collusion between scientists seeking fetal tissue and abortion providers.”

Three new subpoenas come to New Mexico focused on individuals at the University of New Mexico (UNM) and Southwestern Women’s Options. The subpoenas ask for information such as: studies, research or experiments that individuals have participated in, the number and type of fetal tissue obtained from Southwestern Women’s Options, personnel that procured tissue from SWO and documents proving benefits or compensation for providing fetal tissue.

UNM as a publicly funded institution bears the responsibility of transparency, yet, at every turn they avoid accountability and fight to keep the truth from being exposed about how deeply entrenched their radical abortion agenda is. Whether through our and other pro-life attempts to obtain public records or congressional attempts, UNM just doubles down and is petrified about the consequences of allowing even basic facts about their abortion involvement from seeing the light of day.

Bud Shaver, executive director of Protest ABQ issued the following statement, “Just this week, we mailed postcards into Albuquerque neighborhoods because we believe the community deserves to know who is responsible for UNM’s radical abortion agenda they are funding with their tax dollars. Of all of the postcards that we have dropped over the past five years, we had to battle to get this one out. UNM tried to prevent the post office from mailing out our postcards. UNM wields a mighty hand over local businesses and our printer was weary about completing the order for us after being notified by the post office that UNM was attempting to block our postcard from going out but Tara did what she does best and had the post office directly email our printer once all the legal issues were resolved and clarified. Here is what the post office said to our printer, ‘Our legal department says we cannot refuse the mailing if it is brought to us as long it is properly prepared and paid for.’ Free speech trumps UNM and their strangle hold over the truth from reaching the community. This is clearly a battle over hearts and minds and that is why we fight so hard…and never back down.”

Rep. Marsha Blackburn says it best in her statement after issuing this new round of subpoenas, “The Select Investigative Panel is working in a thoughtful and thorough manner to find the facts about what exactly is going on at these abortion businesses and procurement organizations. Unfortunately, some of these organizations have so redacted documents — even after being subpoenaed — that it is impossible for us to get the complete picture of what is actually going on. Others have refused to produce documents required under previous subpoenas, and have threatened to withhold additional subpoenaed information.There should be no resistance to letting all the facts come out — but some abortion supporters seem to be clearly rattled with basic facts coming to light. Therefore, in the interest of completing our investigation pursuant to H. Res. 461, we will continue to issue subpoenas when necessary to ensure information can be gathered in a timely fashion.”
​
Some claim that aborted fetal tissue harvesting is necessary to make strides in medical research and defend the use of aborted fetal cells in vaccines. We maintain the position that utilizing and capitalizing on the death and body parts of innocent children for any reason is immoral and unethical and should therefore cease immediately.

Please contact UNM President Robert Frank and ask him to urge the Board of Regents to terminate the contracts of Dr. Paul Roth and Dr. Eve Espey.

How Much Money Does it Take For New Mexico GOP Leadership to Turn A Blind Eye?