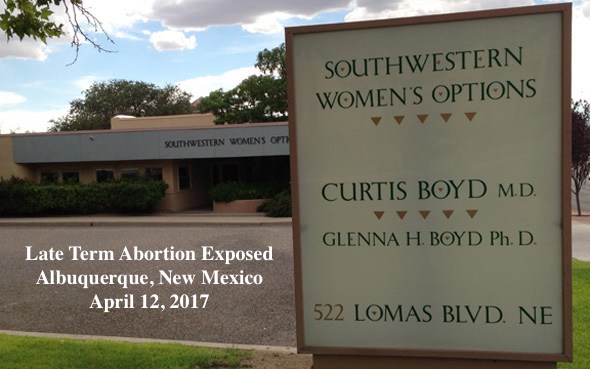 Albuquerque, NM- In January of 2015 a 20 year old woman from Great Britain sought a destination willing to perform an abortion for her at 30 weeks of pregnancy… so that she could continue going to college. Did she have to go to Vietnam, China, or North Korea? No, she traveled to Albuquerque, New Mexico to have her baby killed.

Why didn’t she have her late-term abortion in Great Britain? Because the international community has rightfully rejected barbaric late term abortions. Only 7 nations including China, North Korea, Vietnam, Singapore, Canada, Netherlands and the United States of America still allow them.

Most Americans refuse to accept the assertion that late term abortions are performed here. Interestingly, late-term abortion is overwhelmingly rejected by 80% of American women! Even a majority of the “pro-choice” community is uneasy declaring their support for such a barbaric procedure.

Listen to our latest undercover video for yourself: Exposed: 33 Week Late Term Abortion In New Mexico

“Americans must wake up and realize that bottom of the barrel states like New Mexico still allow late term abortions without restriction. This, in addition to the fact that through New Mexico Medicaid tax payers are funding these unconscionable procedures that at 33 weeks of pregnancy cost $15,500 should be enough for reasonable people to be pro-active in bringing late term abortions to an end. Late term abortions are a grisly trade and America must join the rest of civilized society and reject this inhumane treatment of pre-born babies,” stated Tara Shaver, spokeswoman for Abortion Free New Mexico.