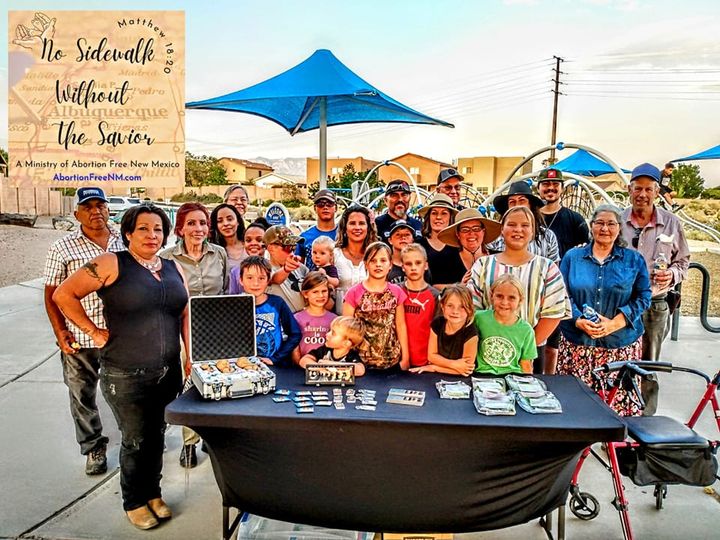 Albuquerque, New Mexico-Thank you for your continued prayers and support. Our family is humbled to serve the Lord in New Mexico as pro-life missionaries and to be the voice for the children the Lord loves so much. We couldn’t do this important life saving ministry without you! This month we have continued to light up the darkness with our prayer campaign outside the UNM abortion center, every day at least one person is present but we need more people to sign up for one hour.

We also called for accountability of our elected officials at the city level when two republicans voted to make sure that Planned Parenthood of New Mexico receives $250,000 of our tax dollars. If these republicans had voted against this funding it would have been blocked.

TAKE ACTION: Abortion Free New Mexico urges you to contact councilors Brook Bassan and Trudy Jones to express your disapproval of their actions and to urge them to resign immediately.

This is a prime example why the pro-life pledge we are asking candidates to sign is so vital. So far we have 30 candidates from across the state who have pledged to defend life from conception to natural death. Thanks for standing with us and together we are building a culture that loves life.

“Tara Shaver with Abortion Free New Mexico spoke with American Family News about the quarter-million dollars given to the local abortion provider. According to Shaver, the city of Albuquerque is already facing many crisis situations financially, so she finds it ‘completely absurd’ to reward a non-essential business. The official minutes from the May 16 meeting indicate the city took a half-million dollars from ‘affordable housing’ and gave half of that to Planned Parenthood to free up more of the abortion company’s budget for abortions.”

As Ward 29 Chairman, Bud would like to thank everyone who came to our first ward meeting at Lava Rock Brewing Company. We had an amazing turnout with about 60 people present. There is great potential to flip this district and take New Mexico back from the liberal Democrats.

Abortion Free New Mexico wrapped up another successful month of prayer with our No Sidewalk Without the Savior Campaign. We have our amazing team of volunteers to thank for making sure that each day people were present and praying for an end to abortion at the University of New Mexico. One of our volunteers shared this testimony,

“I need to tell you what happened yesterday when praying at the clinic with Tom. A young lady walked all the way up the hill, started with ‘I am a Christian’ and told us she has 3 kids and just found out she is pregnant. She is barely making it now and is concerned about another baby. Her name is Samantha. Does not want an abortion but… Did not say she is married. We were struck with her concern for the future. We panicked to some extent. It is easy to pray “shut down this clinic” but tough to help someone going thru a real challenge. We prayed with her and gave her one of the resource packets.”

This story demonstrates the importance of being present at the places where women seeking abortions are.

If our team had not been there, this woman wouldn’t have local resources to pursue and she most likely wouldn’t have reached out for prayer because of the shame and stigma that is inevitable for women considering an abortion. It is a blessing to know that when the body of Christ is present opportunities arise and we can be the light in this dark world.

From a Tuesday Volunteer: “A gentleman pulled up to the stop sign and called out to us telling us that he was not going to abort his baby, that he was going to keep his baby. He then did the sign of the cross and seemed so full of joy.”

Join us tomorrow for Faith To Action Friday as we collectively come together to put our faith into action outside the UNM abortion center.

You’re Invited to Pray & to Stand Up For Life at the University of New Mexico’s free standing abortion facility.

This month, Tara Shaver of Abortion Free New Mexico joined Owen Shroyer on the Infowars War Room to discuss how Late (Third Trimester) Full-Term abortions are not a conspiracy theory but a tragic reality. New Mexico is the proof. She also pointed out that in light of Roe v Wade being overturned that  New Mexico will continue to be ground zero for all abortions and abortion tourism.

“Tara Shaver of Abortion Free New Mexico has been fighting abortions in America for years, she is now attempting to end abortion in New Mexico. Tara Shaver joins Owen to discuss her pro-life activism in New Mexico and what she sees ahead as Roe v Wade will soon be overturned.” Infowars War Room