Albuquerque, NM- Eight years ago Tara and I joined a group of peaceful pro-life protesters in Washington D.C. at the crack of dawn onto the inauguration route of newly elected President, Barack Obama. In fact we (pro-lifers) were the very first presence allowed onto his inauguration route that day. Reverend Patrick Mahoney led the way through the check points with his secret service contacts amidst “boo’s” from the massive crowds. We were protesting at an inauguration before it was a trendy thing to do but what did our banners say?

We weren’t violent or hateful though, in fact, we came in just the opposite spirit, we came peacefully and prayerfully to our nation’s capital.

That inauguration ushered in the most radical pro-abortion administration in the history of America. We also had signs and trucks driving around the city stating and protesting,

Since then, Tara and I have traveled all across this great country starting with first moving from Flagstaff, Arizona to Los Angeles, California to work with the Survivors of the Abortion Holocaust. After working with Survivors, we moved from California to Wichita, Kansas to work as interns for Operation Rescue. After our internship with Operation Rescue, we moved to Albuquerque, New Mexico. In the past decade we have moved a total of 8 times! Between Tara and I, we have been unlawfully arrested over 14 times! We have been hacked, bombed, assaulted, death threatened, almost run over twice, slandered, designated as domestic terrorists, called extremists, cursed out by New Mexico GOP leadership, shunned, ostracized, fired from our Christian ministry, asked to leave churches we were attending and forced out of our home twice! (As Fr. Stephen Imbarrato always reminds us, Matthew 5:10-12) 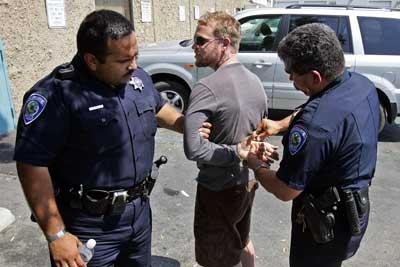 Today, January 20, 2017,  Donald J. Trump was inaugurated as the 45th President of the United States of America and what a difference 8 years makes. With a brand new administration comes a new opportunity for hope! As Christians we are called to pray for our leaders. While we have offered countless prayers for our former president, Barack Obama, we have a glimpse at our prayers now being answered. Most Christians fail to realize that we are told what to specifically pray for regarding our leaders. Let’s look at 1 Timothy 2: 1-2 …

“I urge, then, first of all, that petitions, prayers, intercession and thanksgiving be made for all people, for kings and all those in authority…

We are told specifically what to pray for…

“That we may live peaceful and quiet lives in all godliness and holiness.”

While we will continue to hold our leaders, including Donald J. Trump and his administration accountable, our prayer is that our new president, will usher in a new season not just for our family, who is weary from battle, but also usher in a new season for our country. Vice President Mike Pence took his oath of office and placed his hand upon this verse in 2 Chronicles:

“If My people, who are called by My name, will humble themselves and pray, and seek My face and turn from their wicked ways, then I will hear from heaven, and will forgive their sin and will heal their land.”

We are weary from a decade of being at war, our prayer is that God hears Vice President, Mike Pence’s prayer and our prayer, that he will heal our land and that we can all live quietly and at peace, in all godliness and holiness.

(2007-2017) From Friendship Evangelists to Notorious Pro-Life Activists: Our battle in the trenches began a decade ago back in 2007…

Starting in Washington D.C. at George Mason University after Barack Obama’s Inauguration, we visited over 180 college and high school campuses all across the country educating our peers with the truth about abortion. We were invading Liberal “Safe-Spaces” before it was cool!

November 2013: The right’s scary new test lab: Antiabortion activists take over a major city- How one little-known couple helped turn Albuquerque into a petri dish for a new, national strategy to ban abortion

Media Matters: What Media Should Know About The Anti-Choice Group Protest ABQ

October 2014: Are Anti-Abortion Activists Determined to Topple Their Pro-Life Governor?

(Part 2) Lobos of Death: A Look at the Radical Abortion Agenda at the University of New Mexico

Bud and Tara Shaver’s Highlights of 6 Years of Ministry in New Mexico:

For more information visit our websites: