By Bud and Tara Shaver

Happy New Year from our family to yours! God has been faithful this past year. It has been quite eventful this year as we continue to push back the darkness of the New Mexico abortion cartel, hold leaders accountable and work to save the lives of pre-born babies. 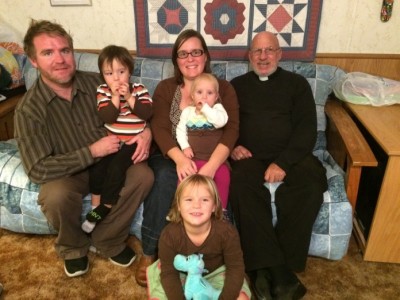 We moved here to New Mexico in 2010 to expose late-term abortion since nearly 90% of Americans oppose late-term abortions. We helped launch the first ever citywide referendum that would have banned abortions after 20 weeks of pregnancy in 2013. In 2015, five years of groundbreaking research and a public exposure campaign through Protest ABQ was the catalyst of the first pro-life bill to EVER pass the New Mexico House…a Late-Term Abortion Ban! In a monumental national effort to ban late-term abortions, Bud traveled to Washington D.C. to stand in solidarity with pro-life leaders in calling for a vote on H.R. 36, the Pain Capable Unborn Child Protection Act. Coinciding with the National Day of Prayer (May 6, 2015), pro-life leaders gathered at U.S. House Speaker, John Boehner’s office to pray and urge the passage of a National Ban on Late-Term Abortions. Bud hand delivered signatures collected from a petition by New Mexicans and voices from all across the nation calling for an end to abortions at 20 weeks of pregnancy to House Speaker Boehner’s office…and just days later the U.S. House did just that!

The pro-life community from all across the world came together in prayer and action in an attempt to help a divided family from the United Kingdom who traveled to Albuquerque for a late-term abortion. Unfortunately, despite all of our best efforts, the mother aborted her 30-week old baby. Despite this tragic loss, national awareness was raised about the need to end late-term abortions in New Mexico.

A separate opportunity arose when we were contacted by the pro-life community in Lubbock, TX about a Christian family traveling to ABQ to kill their 5 month old daughter who had recently been diagnosed in the womb as having Down Syndrome.

We contacted their church and mobilized a prayer network, as a result, we were notified that the family changed their mind and did not end up killing their precious little girl.

Read more here: Mother 5 Months Pregnant Decides at Last Minute Not to Abort Her Baby With Down Syndrome Protest ABQ sponsored the Albuquerque protest and co-lead it with Fr. Stephen Imbarrato of Priests for Life. The historic protest sent a strong message of solidarity and resounding declaration to political leaders in New Mexico that New Mexicans want to end pre-born child killing in this state. In 2015 our protest efforts were cranked up into full gear as we protested both pro-abortion politicians and soft PLINO (Pro-Life In Name Only) Republican politicians who both only serve to perpetuate the radical pro-abortion climate in New Mexico. We also continued to highlight and protest the University of New Mexico (UNM).

We wrapped up a productive year of pro-life ministry by filing a formal complaint with the Attorney General asking for a thorough investigation of the harvesting of aborted baby body parts at Southwestern Women’s Options (SWO). The ABQ Journal newspaper published a great article that confirmed SWO is the sole provider of fetal remains to UNM.

Please join us in prayer that the AG will follow through and that in 2016 we will see SWO close down and UNM will  abandon its radical abortion agenda.

Read ALL of our Protest efforts from 2015 at our Mission Field page. We are so grateful for each one of you who gives each month to our ministry. We could not do this important life saving work without you!

We rely on regular monthly donations to meet our needs as a ministry and family. In 2016 would you consider setting up a monthly recurring donation to help us start the new year strong? Or perhaps a one-time gift?  Please visit prolifewitness.org.

Bud and Tara are contributing writers at For God’s Glory Alone Ministries-FGGAM. You can read all of their articles here.