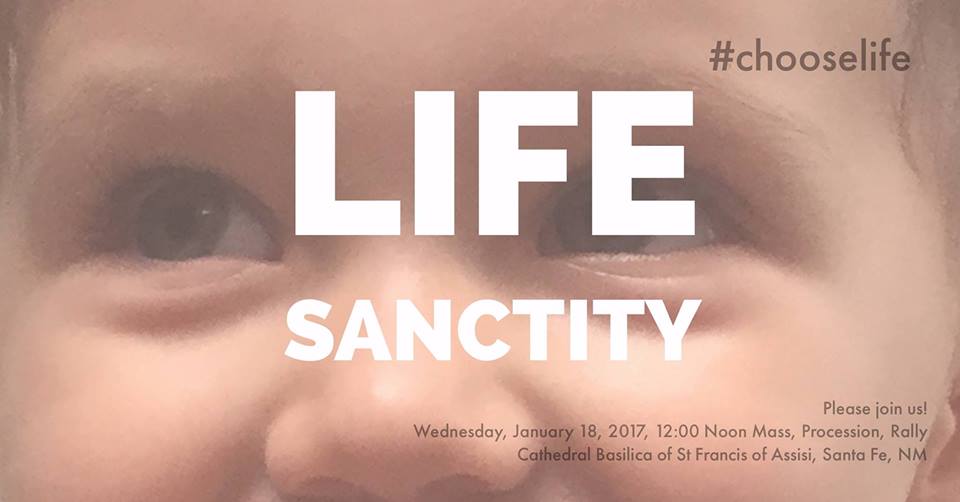 Albuquerque, NM- This week thousands will gather in Santa Fe to attend a pro-life Mass celebrated by the three bishops of New Mexico followed by a procession to the Roundhouse where a rally will be held to mourn another year of legalized pre-born child killing in this country.

This annual event is sponsored by the New Mexico Conference of Catholic Bishops and all are welcome and encouraged to attend.

While New Mexico faces many obstacles in the overall effort to protect human life, a major concern this 2017 session is the potential introduction of a physician assisted death bill into the legislature. State Representative Bill McCamley (D-Las Cruces) told the Albuquerque Journal that he plans to introduce such a bill this session.

In June of last year the New Mexico Supreme Court upheld New Mexico’s Assisted Suicide Act, which prohibits deliberately helping another person take his or her own life and is considered a fourth degree felony.

This law was challenged in 2014 by none other than two physicians at… the University of New Mexico Hospital. These two physicians, in addition to a cancer patient in Santa Fe (whose cancer is now in remission as of June 2016) had apparently challenged the law in order to allow physicians the ability to kill their patients but evade being held responsible under New Mexico law.

Earlier this month in “The Great Gift of Life” written by New Mexico Archbishop John C. Wester he states, “those that support doctor-assisted suicide use names like ‘death with dignity,’ ‘aid in dying,’ or ‘compassion in choices,’ because they mistakenly believe that allowing someone to end their life on their own is a dignified action. However, there is no dignity or compassion in assisted suicide.”

In addition the New Mexico Conference of Catholic Bishops issued a statement regarding the New Mexico Supreme Courts decision stating in part, “In the Year of Mercy, Pope Francis calls us to be deliberate in our acts of kindness and love. One of the greatest ways to love is to journey with another’s suffering and pain. Here, we make a call for a consistent ethic of life.”

Protest ABQ stands with the Bishops of New Mexico in affirming life from conception until natural death and oppose any effort by New Mexico legislators to further push this agenda of physician assisted suicide.

“It has always been discouraging to see so many Catholic legislators vote for death and against their faith. If an assisted suicide bill is proposed this session, it is an opportunity for Catholic legislators to show the faithful that they truly respect life and Catholic teaching more than their political agendas,” stated Fr. Imbarrato: The Protest Priest, Priests for Life. ​

During this session it will be interesting to see if radically pro-abortion Catholic legislators like Sen. Gerald Ortiz y Pino, Sen. Michael Padilla, Sen. Bill O’Neill, and Rep. Patricia Roybal Caballero, will continue to defy their faith and the bishops of New Mexico by going a step further in their rebellion and support physician assisted suicide legislation in 2017.