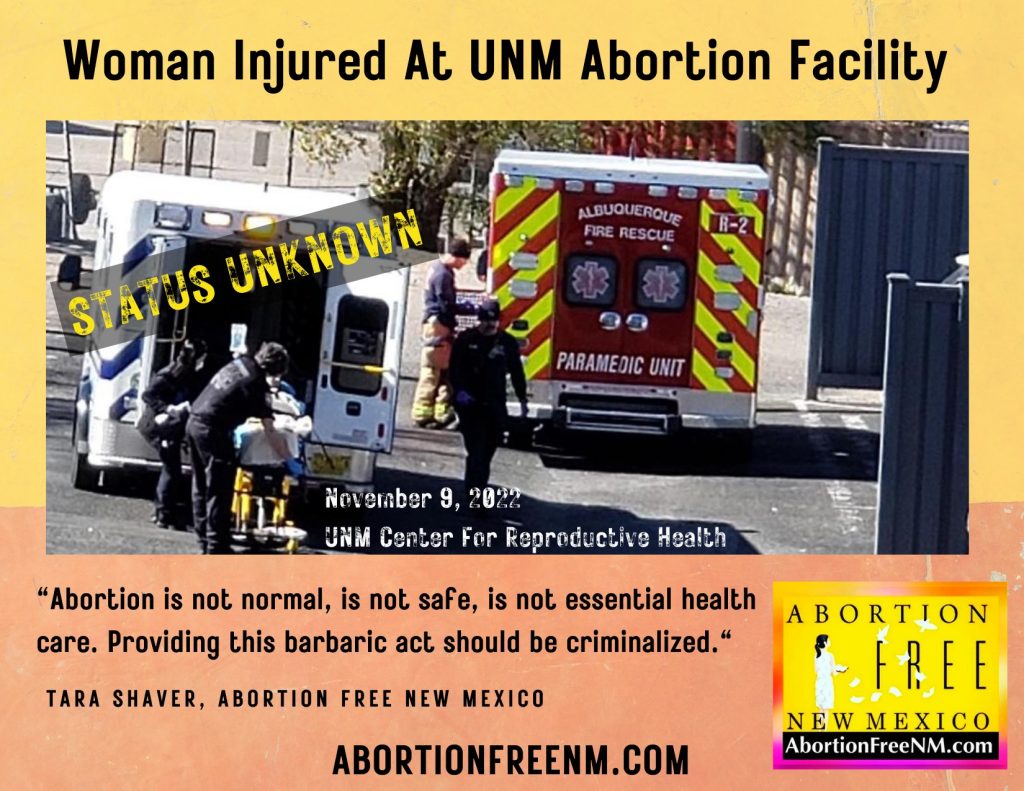 By Bud Shaver
​
Albuquerque, New Mexico– On Wednesday, November 9, 2022, a prayer volunteer with Abortion Free New Mexico witnessed a woman being transported by ambulance from the UNM Center for Reproductive Health (UNMCRH) abortion facility right before the lunch hour. This medical emergency occurred the day after New Mexicans largely elected 100% pro-abortion candidates in the general election across the state. It is unknown what the status of the woman’s injuries are but it is known that UNM abortion center performs late-term abortions up to 24 weeks (6 months) of pregnancy.

Abortion is not normal, is not safe, is not essential health care. Providing this barbaric act should be criminalized,” stated Tara Shaver of Abortion Free New Mexico.

Abortion Free New Mexico has documented numerous abortion injuries over the years at the UNM abortion facility in an attempt to bring awareness to the dangers of the unregulated abortion industry in New Mexico. Since abortions are blind procedures and a woman’s uterus is thinned out to make room for a baby, abortion instruments can perforate the uterus or even the cervix. Sometimes during second trimester abortions when the abortionist is reaching in and pulling out the baby in pieces, a woman’s bodily organs can also be extracted which requires emergency surgery.

The condition of the woman injured at UNMCRH on November 9, 2022 remains unknown at this time.

Abortion Free New Mexico will file a medical board complaint based on this incident and an investigation will be requested to see if negligence was the cause of this emergency transport. Abortion Free New Mexico will also seek to obtain the 911 call that summoned the ambulance to the facility. Unfortunately, the city of Albuquerque has a long history of denying these public records and we are considering legal action in the near future.

It is unfortunate that New Mexicans continue to elect candidates who turn a blind eye to the fact that abortion harms women and kills innocent children in the womb. Every life should be cherished and women deserve to know about the alternatives to abortion that won’t land them in the hospital with potential life threatening injuries. We pray for the people of this state, that they will one day reject the narrative that abortion is healthcare because it clearly is not. Abortion needs to be called out for what it is, the brutal dismemberment of children, and should be rejected by all.”