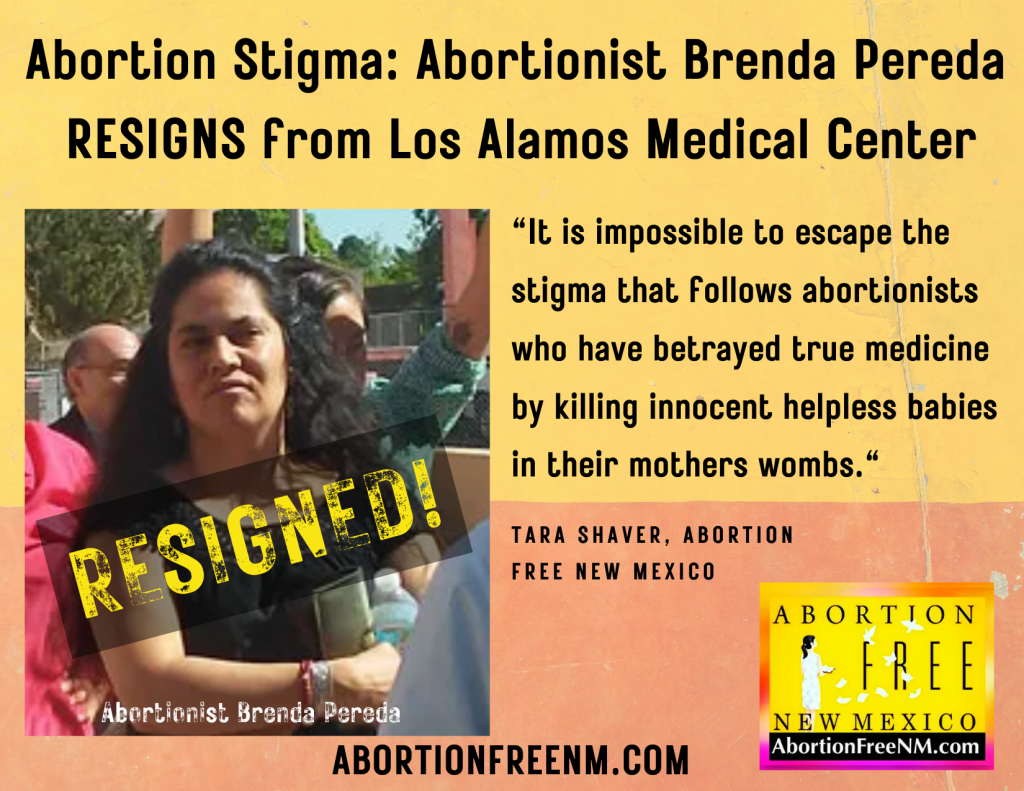 By Bud Shaver
​
Albuquerque, New Mexico– In October of 2020, Brenda Pereda, a controversial University of New Mexico trained abortionist opened a Women’s Clinic at the Los Alamos Medical Center (LAMC). In interviews she was not shy about her agenda to provide abortions for “whatever the reason” and to expand a pro-abortion agenda “into the DNA of the hospital.” However, by March of 2022 she had resigned from her position and it’s clear that her agenda wasn’t welcomed by fellow physicians at the Medical Center.

It is impossible to escape the stigma that follows abortionists who have betrayed true medicine by killing innocent helpless babies in their mothers wombs,” stated Tara Shaver of Abortion Free New Mexico.

Community groups such as BabyNet, a subcommittee of the Los Alamos County Health Council, and the First Born Program openly welcomed Pereda and her radical abortion agenda but the hospital itself failed to consider the baggage that she would be bringing into the medical community.

While Brenda Pereda’s excuses for resigning from her newly obtained position at the Los Alamos Medical Center stemmed from a “non welcoming feeling” from a “male doctor-centered environment” that she claimed originated from alleged racism because she is a, “Latina physician of color of Mexican descent.” It is more likely however, that her reputation as an abortionist and her stated agenda to foist a radical abortion agenda upon the Los Alamos Medical Center staff is what was not welcomed. This is bolstered by her own admission to the Los Alamos Reporter that she was triggered that her colleagues may have considered her solely as an, “abortionist”.

While Pereda claimed that the work environment was hostile and unsafe for her, a spokesperson for Los Alamos Medical Center stated that,

A thorough investigation has taken place, and we are confident that these claims of a hostile and unsafe work environment are unfounded.”

Pereda’s replacement is Dr. Sharon Ransom and according to a receptionist she does not perform abortions and the Los Alamos Medical Center will not allow abortions in the hospital.

Abortion Free New Mexico is pleased to report that no abortions are being performed at the Los Alamos Medical Center. Every abortion takes the life of an innocent human being and the stigma surrounding those who perform abortions is a natural consequence that will never dissipate. More doctors should disassociate with those who do harm by performing abortions. The community of Los Alamos must stand together in order to make sure that abortions are not expanded into their community. New Mexico continues to be an abortion magnet in the bigger cities like Albuquerque and Las Cruces. The pro-life community continues to strive to meet the needs of pregnant women so that killing their children in the womb will one day become unthinkable.”

Brenda Pereda sits on the National Abortion Federation Board of Directors and prides herself on working at the University of New Mexico (UNM) for over a decade as an Assistant professor and Assistant Dean of diversity, equity and inclusion. Pereda also trained residents and students to perform abortions. She has published various medical research projects regarding postpartum IUD insertion, reversible and permanent contraception in India as well as nitrous oxide for pain management of first trimester surgical abortions.

Pereda has most recently been sighted at Southwestern Women’s Options late-term abortion facility located in Albuquerque, NM. It is unknown where she is currently employed.