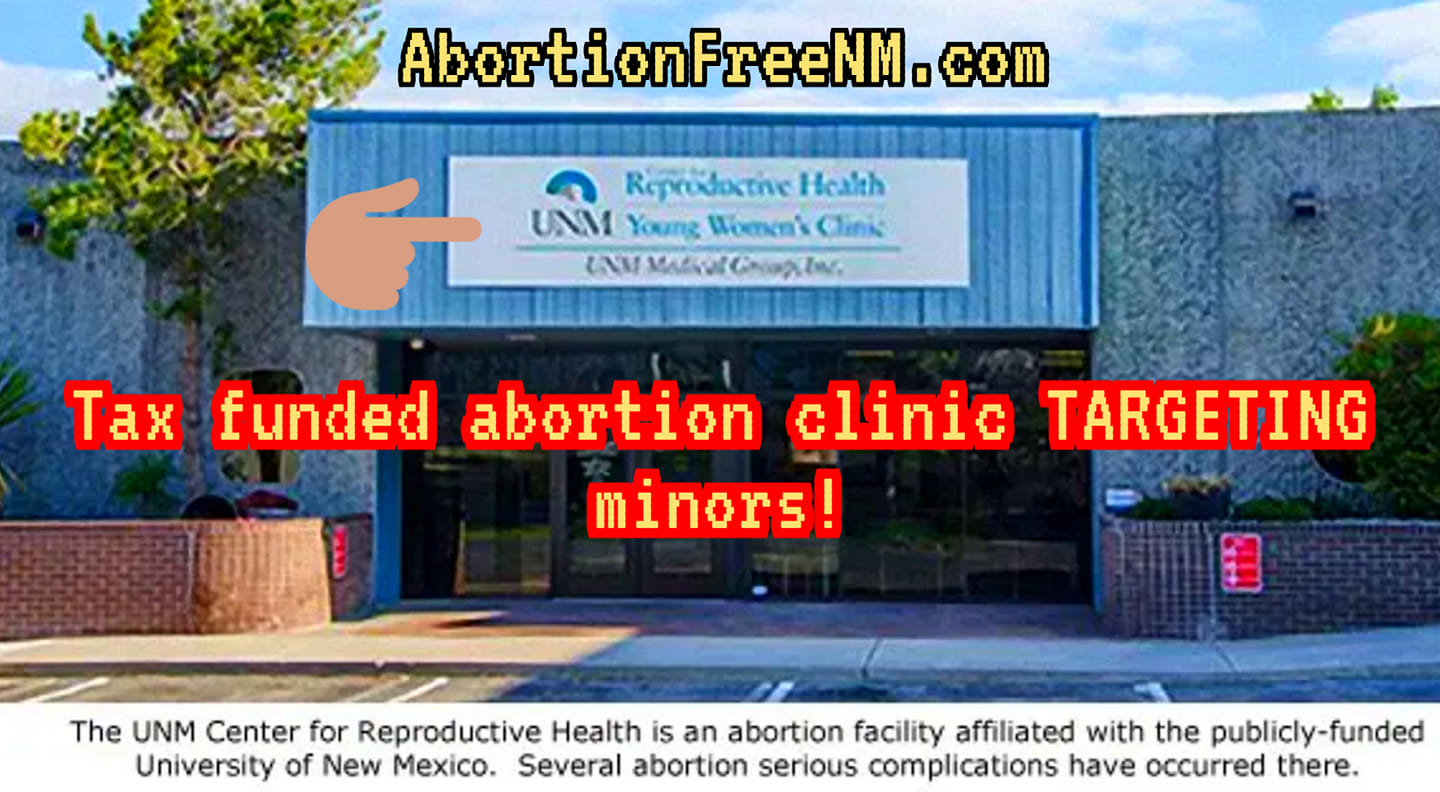 By Bud Shaver
​
​Albuquerque, New Mexico– In a recent report, Abortion Free New Mexico exposed how federal tax dollars are funding late-term abortions in New Mexico, in violation of the Hyde Amendment, through the state’s Medicaid program. This struck a nerve, went viral, and even drew a response from US Congressional candidate Michelle Garcia Holmes (R) who stated,

“This will stop when I’m in congress!”

What is even more shocking is that due to the absence of ANY common sense abortion restrictions (like parental notification laws) the New Mexico abortion cartel is able to TARGET minors for abortions, and our tax dollars fully fund this too! In fact, undercover reports conducted by members Abortion Free New Mexico reveal that abortion clinics workers are coaching minors (as young as 14) on how to get New Mexico Medicaid to pay for their abortions- even when their pregnancies are the result of sexual abuse.

In fact, the University of New Mexico is so brazen in their exploitation of minors (or “young women” as they call them), that they run a “Young Women’s Clinic” at the same location as their abortion clinic!

Check out their sign which reads, “UNM Center For Reproductive Health [and] UNM Young Women’s Clinic”

Below: A UNM Young Women’s Clinic (YWC) ad on Tumbler that targets minors

In addition, to the University of New Mexico targeting minors at the “Young Women’s Clinic,” Abortion Free New Mexico has exposed in other undercover investigations that all of the abortion facilities in New Mexico are targeting and exploiting minors for financial gain.

FLASHBACK: Tara Shaver, spokeswoman for Abortion Free New Mexico said it best in one of the reports covered by LifeNews back in 2017,

“Instead of urging the minor to contact the authorities, the abortion clinic staff gives the young girl a phone number to the New Mexico Medicaid office so that she can obtain the $7,500 procedure for free. The reality is that the New Mexico abortion cartel is more concerned about how much money they can make off of selling an abortion, especially lucrative late term abortions, instead of adhering to the laws (mandatory reporting of suspected child abuse) that were passed to protect minors from sexual abuse. We need enforcement of these laws in New Mexico and for our leaders to make sure that this illegal activity is fully investigated.”

Here are excerpts from previous undercover investigations exposing how the lack of common sense legislation in New Mexico is allowing the New Mexico Abortion Cartel to TARGET minors for tax funded abortions:

“In a recently obtained undercover phone call to Planned Parenthood of New Mexico, a 14 year old minor makes an abortion appointment. Not only is the client hiding the abortion from her parents, she is also making sure she can hide the fact that the boyfriend who got her pregnant is a 21 year old man.

This constitutes statutory rape and should be reported to authorities, however, the Planned Parenthood employee assures the minor that the Doctor, Shauna Jamison, won’t report it and that this type of thing happens, and is covered up by Planned Parenthood all the time!

It’s no surprise that Planned Parenthood continues to cover up for rapists since they profit from these lucrative abortions, but in New Mexico where abortion has no restrictions whatsoever, the point needs to be made that young girls are being sexually exploited and abortion doctors in this state are complicit!”

“In a new undercover video by Abortion Free New Mexico and Priests for Life, the caller posing as a minor and victim of incest by an older family member is seeking a late-term abortion at 26 weeks of pregnancy. Instead of urging the minor to contact the authorities, the abortion clinic staff gives the young girl a phone number to the New Mexico Medicaid office so that she can obtain the $7,500 procedure for free.

“In an undercover call placed on May 17, 2017 to Hill Top Women’s Reproductive Clinic in El Paso, TX the caller posing as a 15 year old minor inquires about obtaining an abortion without her parents involvement.

Without hesitation the abortion facility worker refers the young girl to their ‘other clinic location in Santa Teresa.’ Located according to Hill Top Women’s Reproductive Clinic’s website, ‘Only 11 minutes from Downtown El Paso.‘ It’s as if this is one of the main reasons the Santa Teresa abortion facility located a few miles across the border in New Mexico exists.

An abortion appointment is secured for the following Saturday and all the minor is required to bring is $430.00 and her identification card.”

Michelle Garcia Holmes joined us this past week for “Faith To Action Friday” at UNMCRH and interviewed Bud Shaver of Abortion Free New Mexico live on location.

Abortion is their dirty little secret that must be exposed
If you can’t join us, please keep our efforts in your prayers that hearts will be touched and eyes will be open to the truth about abortion in New Mexico.

Bud​ and Tara Shaver have redefined the American Mission Field as full-time pro life missionaries to New Mexico since 2010 and are considered by the radical left as, “some of the country’s most strident activists opposed to abortion!”

With the help of Operation Rescue​ and Fr. Stephen Imbarrato we exposed New Mexico to the world as the “Late-Term Abortion Capital” a designation we coined based on our ground breaking research.