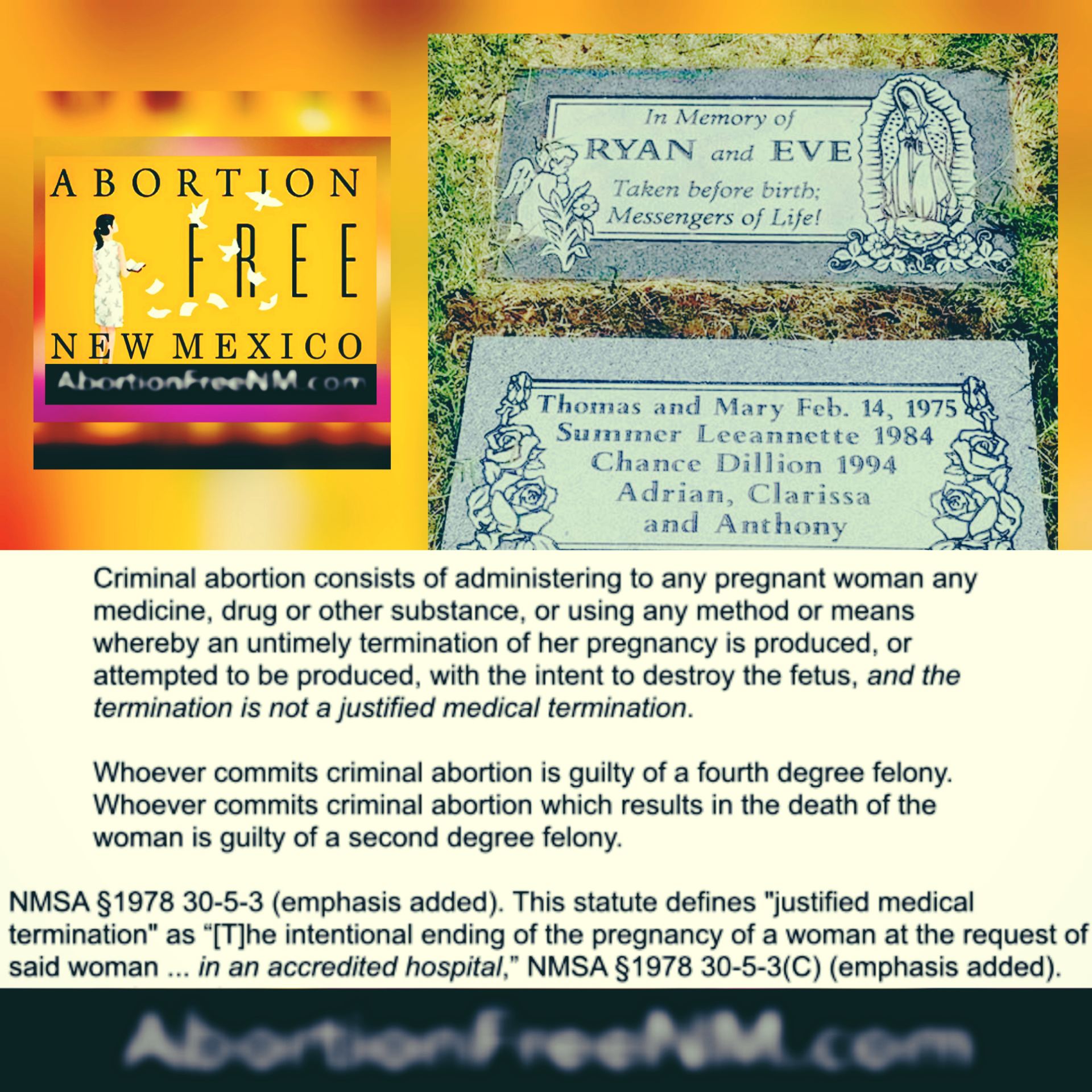 Albuquerque, NM- New Mexico law actually criminalizes the practice of late term abortions that are performed outside of accredited hospitals. However, this law is not being enforced, leaving women to suffer at the hands of unregulated abortionists.

“SANTA FE, N.M. (AP) – Democrats in the New Mexico Legislature are laying plans to end a decades-old ban on abortion that came before the landmark Supreme Court case.

State Rep. Joanne Ferrary of Las Cruces said last week that removes the state’s criminal ban on abortion in case the U.S. Supreme Court overturns a 1973 decision that made the procedure legal nationwide.

She says her cause has taken on new urgency with the addition of Republican-appointed justices under President Donald Trump.
​
A 1960s-era New Mexico’s law makes it a felony for an abortion provider to terminate a pregnancy, with exceptions for rape, birth defects and serious threats to a woman’s health.
The revived proposal has the public support of Democratic Gov.-elect Michelle Lujan Grisham.”

Members of Abortion Free New Mexico pursued enforcement of this law by meeting with various public officials over the past 8 years including in 2013 with then District Attorney Kari Brandenburg. The corruption and incompetence in New Mexico, however, knows no bounds.

What pro-abortion democrats are failing to mention is that the criminal abortion statute also prohibits non physicians from performing surgical abortions. Unfortunately, New Mexico officials have failed to enforce this provision. In 2016, Tara Shaver, of Abortion Free New Mexico, filed a complaintwith the New Mexico Board of Nursing against Planned Parenthood’s abortionist Vivianne Clark. Clark, a Registered Nurse, was reimbursed by New Mexico medicaid for performing abortions from 17-24 weeks of pregnancy. This violation is a fourth degree felony.

The New Mexico Board of Nursing dismissed the complaint this spring without any action.
​
So apparently the only portion of the criminal abortion statute that is being enforced,

“requires that an abortion be performed only with the woman’s consent.”

This provision would be removed if the criminal abortion statute is repealed leaving women vulnerable to abortions being performed without their consent.

“In their anticipation of the Supreme Court overturning Roe vs. Wade the radical leftist democrats in New Mexico are not wasting any time to push their extremist agenda that would remove common sense measures that were enacted to protect women’s bodily autonomy.  Ironically, if they accomplish their stated goal and repeal the criminal abortion statute before Roe vs. Wade is overturned non physicians will be able to perform invasive surgical procedures on women without their consent. Is governor elect Michelle Lujan Grisham really willing to put her signature on a bill that would leave women vulnerable to involuntary abortions being performed on them against their will?” stated Tara Shaver of Abortion Free New Mexico.

Abortion Free New Mexico is encouraging New Mexicans to contact their legislator and respectfully ask them to oppose the repeal of the criminal abortion statute.