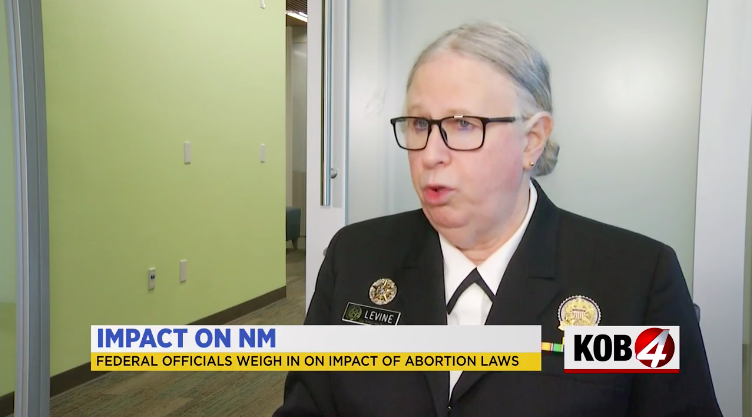 This visit came just nine days after Tara Shaver of Abortion Free New Mexico appeared on the Infowars War Room with Owen Shroyer detailing how New Mexico is currently the late term abortion capital of our nation and is poised to be, “ground zero for abortion period” once Roe v. Wade is overturned.

All-American Women Give Life To Their Children from Abortion Free New Mexico on Vimeo.

“It is absolutely critical for New Mexico to continue to allow the full range of reproductive health services that women need, including abortion services,” Levine said.

“If the decision follows the outline of the draft, then it’s going to severely impact women’s reproductive health rights and the ability to receive the full range of services in many states,” Levine said. “To be able to provide those services for women in New Mexico, and for many other states, they need to look to expand those services. We’ll work to support them.”

“While many Americans oppose the use of federal funds to pay for abortions, and this is prohibited by the Hyde Amendment, it is egregious that the Biden administration has plans to work with the University of New Mexico to prop up the collapsing abortion industry and to utilize federal assistance to fund abortion tourism. These actions will only serve to further the culture of death in our state and the devaluing of human life in the womb.

Just as the federal government is desperately working to enable the University of New Mexico to expand abortion in our state, Abortion Free New Mexico is equally committed to meet the real needs of women in our community. Every day volunteers prayerfully position themselves outside the University of New Mexico abortion center and are prepared to let women know that there is hope and an abundance of pregnancy resources available to them.”

Abortion Free New Mexico is on the Front Lines

The pro-life community has an amazing opportunity to grow together as a powerful life saving force. Abortion Free New Mexico’s daily prayer campaign, No Sidewalk Without the Savior, is a practical way to bring the body of Christ onto the sidewalks in front of the UNM Center for Reproductive Health abortion facility.

Here are a few glimpses of how Abortion Free New Mexico’s prayerful presence is making a difference:

Join us for Prayer & Stand Up For Life at the University of New Mexico’s free standing abortion facility.