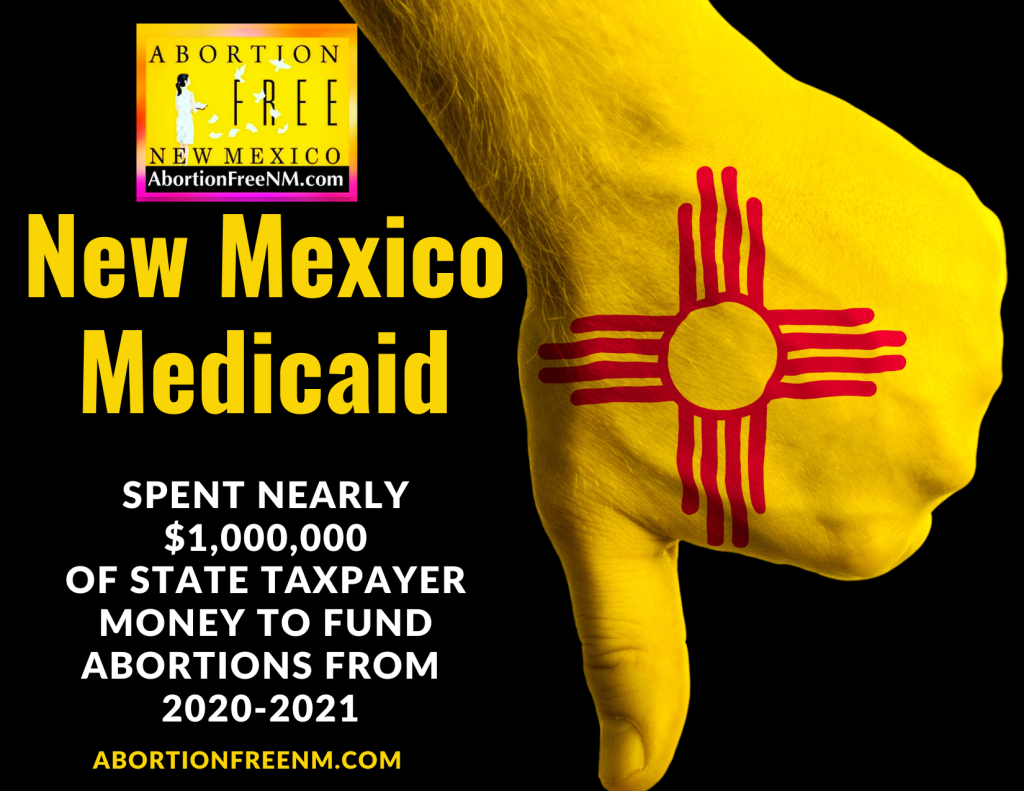 ​Albuquerque, New Mexico- Abortion Free New Mexico has obtained the most current Medicaid data from the New Mexico Human Services Department which shows how much state tax dollars are being used to fund abortions through New Mexico Medicaid.

In a public records request submitted on July 13, 2022, Abortion Free New Mexico’s Tara Shaver asked for information that is a matter of public record which included:

“1. Total number of abortions abortions paid for by New Mexico medicaid in 2020 and 2022. 2. Please include with specificity the week of pregnancy in which each abortion was performed and also the medical provider who was reimbursed for the procedure. 3. Total dollar amount that was paid for these procedures.”

Unfortunately, under the current administration only the total number of abortions and the total dollar amount reimbursed by New Mexico Medicaid in 2020 and 2022 was provided. This lack of transparency is in stark contrast to previous years that Abortion Free New Mexico has made public requests in order to inform the public about how their money is used to fully fund abortions using state tax dollars.

​On Wednesday, August 31, 2022 Governor Lujan Grisham signed an executive order pledging to designate $10 million dollars to fund a borderland abortion center in Dona Ana County. By signing this order she has vowed to use New Mexico tax dollars to fund out of state abortions, primarily for women who cross state lines to kill their unborn children. For her to be able to foist this radical agenda upon New Mexicans she would have to be re-elected and be able to get the funds approved through the state legislature. Abortion Free New Mexico has been working tirelessly to make sure this doesn’t happen by helping to get out the vote for pro-life candidates.

“Nearly $1,000,000 of our tax dollars that are already being paid out by New Mexico Medicaid over the past two years alone for 7,327 abortions should alarm us all and motivate us to act! While we can’t stop New Mexico Medicaid from funding abortions, we can work to prevent Michelle Lujan Grisham’s latest attempt to force us as New Mexican citizens to pay for an abortion center that will cater to out of state women seeking to kill their children by voting pro-life. It is vital that each New Mexican of conscience is mobilized to help get pro-life candidates elected in November. Early voting is right around the corner so time is of the essence to volunteer your time, talents and treasure to the candidate of your choice who will stand for life and make sure that Lujan Grisham’s nefarious plans don’t come to fruition,” stated Tara Shaver, spokeswoman for Abortion Free New Mexico.