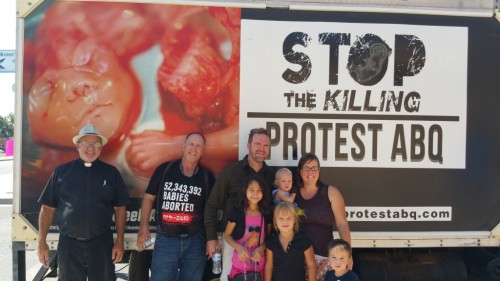 By Bud and Tara Shaver,

As Pro-Life Missionaries we are NOT in this battle over Life and Death to build up an organization or to build up our database…WE are in this to END this and Stop The Killing. We are willing to lay our lives down each and every day and sacrifice ourselves and our reputation for the sake of the lives being lost each day and for God’s kingdom. We don’t do what is popular or trendy…we do what is necessary to expose the deeds of darkness!

In the month of September we worked hard at pushing back the darkness in Albuquerque as well as planting seeds of life in the hearts of many. We were blessed to sponsor the National Day of Remembrance for Aborted Children with several other local pro-life groups. With about 70 in attendance we held a solemn service to remember the victims of abortion, the pre-born children who’ve been killed since 1973. It’s so important for us to hold these types of events so as to make sure we don’t forget what we’re in this battle for. It’s easy to get distracted but we must remain steadfast in our goal of ending this grave injustice once and for all.

Standing Up For Our Rights: 12 hour Protest

This month we stood in solidarity with Pro-Life Waco and sponsored the first EVER “Dawn to Dusk” 12 hour protest on a freeway overpass in Albuquerque. We actually hold weekly protests on this particular overpass with no real problem, since it is a public space. This month however, within an hour of us setting up, NM State Police and NM Department of Transportation launched their battle to remove us. Using administration code and ridiculous claims that our banners were hindering the structural integrity of the overpass they remained persistent throughout the day to remove our constitutional and peaceful presence from the overpass.

And more (Round TWO) here: A Civil rights violation

We stood firm and stood up for our right to educate the public with the truth. No one was arrested and no citations were issued, we are looking into filing a complaint due to the harassment we endured.

Social Tension is Necessary in our Efforts to End Abortion

The connection between the efforts of NMDOT to shut down our overpass protest and the efforts of Albuquerque Mayor Richard Berry to trample on our right to drive the truth truck in ABQ neighborhoods are abundantly clear now. It is no coincidence that 2 attempts were made to hide what is happening in our city. Satan himself wants the truth hidden! So who do we side with when we refuse to show the truth? Let’s face it: No one wants to see what abortion does to children, least of all the pro-aborts and sadly even those who claim to be pro-life, side with the pro-aborts, when they attempt to revoke our right to show the true victims of abortion to our depraved city.

This is what our Mayor did this month when he asked us to stop driving the truth truck in Albuquerque!

Social tension is required to shed light on atrocities such as pre-born child killing but also to bring people out of their slumber and apathy so that direct action will be taken to stop the killing in it’s entirety. As Christians we must plant the seeds of social tension with truth and love and trust that God will bear fruit in His time

If we don’t plant these seeds, who will? Even though we are not a political group we exposed Pat Davis who is running for ABQ city council to his neighbors. Davis, a leftist activist, has aligned himself with our opposition since the day we moved here as missionaries.

He wants to be city council president but we think he’s too extreme and will not help make the city a better place for women and least of all children. If we weren’t willing to oppose him, no one else would have.

Thank you for standing with us and making what we do possible. We are in this to end abortion to the honor, glory and praise of the Father!

We need your prayers and support more than ever, please consider becoming a monthly financial partner with us so that we may continue doing what others are unwilling to do to make NM abortion free.

Thank you, we cannot continue this ministry to New Mexico without your prayers and faithful support.

The HUB of New Mexico:
http://www.fggam.org/2015/09/an-open-letter-to-mayor-rj-berry-from-the-hub-of-new-mexico/