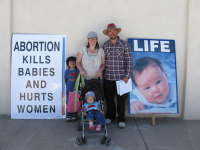 The hardest thing each day at the abortion clinic is when it’s time to leave. However, one day as I was gathering up all the signs, I was helped by a woman who had come to pray. She picked up some of the signs to bring them to the truck just as a car was pulling up to Boyd’s. The woman coming to the clinic caught a glimpse of one of the signs the volunteer was holding. The image stopped her in her tracks and immediately brought conviction. The next sign she saw was the reality of abortion and she covered her mouth and gasped. In an instant she changed her mind about going into Boyd’s abortion clinic. She realized we were there to offer help, but she didn’t speak English. We used signals and gestures to ask her how old her baby was and her friend responded by saying that the baby was 5 months old. We gave her Spanish literature and then with broken Spanish asked if her friend would follow one of us to Project Defending Life. The friend shook her head yes and another volunteer escorted them to PDL for help. A picture has the power to bridge the gap between life and death; it can speak volumes and transcend language barriers. Nothing is insignificant when you step out in faith. God can even use you as you are leaving to help save a life!

This month at the UNM Center for Reproductive Health, a van parked fairly close to where Bud and others were praying. We asked those inside if we could pray for them and they said yes. A couple and a young woman came over. After we prayed one of the women went into the clinic. The woman’s sister and her boyfriend stayed and spoke further with us. We were told that the young woman was abortion minded. They had tried everything to talk her out of having an abortion. We gave them some literature with local life saving resources. We asked the sister to go inside the clinic and show her sister the information, and she did.
A few minutes later she came back out and said that her sister wasn’t interested in receiving help. The couple said they couldn’t wait around and left. Several minutes later the young woman came out of the clinic . She pulled out a cell phone and called her sister. A few minutes later the van showed back up and they left the clinic. Praise God, prayer and persistence helped save a life!

Storming the Gates of Heaven

Our family participated in the Jericho Walk this month. The Jericho walk is the largest pro-life event in New Mexico which represents the Old Testament story of Joshua marching around the city of Jericho 7 times with the walls tumbling down after. We marched around Planned Parenthood 7 times while praying for an end to abortion in ABQ. Bud also had the honor of speaking at this event. He was able to share about how ABQ has become the Late-Term abortion capital of the U.S. and the opportunities available to reach out and serve women, families, and children in need. Prayerful, public, and peaceful events like this are the key to ending abortion in New Mexico, the U.S and the world! Pray that more church leaders will catch the vision for Life and host events like this in your community.

This month we were blessed to speak to 2 different groups about our ministry and how others can get involved. We were invited to the Rio Rancho, NM Right to Life Chapter meeting. It is so vital for all members of the pro-life community to have the same knowledge about what is taking place in our communities. We pray that this group was encouraged by what we are accomplishing (by God’s grace) and will continue doing the great work of NMRTL.

Tara also spoke at a ladies Bible study. She was able to answer some of the tough questions people have about abortion. Hopefully she will be able to visit the group again and encourage the women to become involved. We cherish each opportunity to share the truth because we know that when people know what is happening it’s difficult to continue to ignore it.

This month during 40 Days For Life, God provided an opportunity for us to lease another PDL location right across the street from the UNM Center for Reproductive Health! Project Defending Life will now have two locations next to two different abortion clinics in Albuquerque, NM. Praise God! The new location will open May 1st. It is so important to have a continuous presence at our local abortion clinics and it is just as important to have life affirming help and resources to offer these women and couples in need. It is even that much more effective having a place to send them for help and an ultrasound just a few feet away! We know many babies will be saved and women helped through this new PDL location!