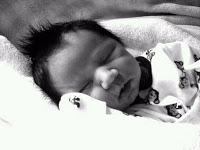 In May we were blessed to see 2 more babies born. You may remember the testimony from several months ago regarding a baby that was saved via text messaging. Tara received a call from a woman whose grand-son’s girlfriend was going to Planned Parenthood for an abortion. We will call her Jane and she was literally on her way to the clinic, and all that Tara was given was the Jane’s stepmothers cell number. Needless to say we were on high alert trying to contact Jane with many obstacles in the way. Eventually Tara was given the Jane’s cell number and began texting her.

Thankfully, Tara earned Jane’s trust after only a few texts and realized that she wanted to help. Tara was able to text her a picture of a 6 week old preborn baby and encourage Jane to ask to see her ultrasound. Ultimately it became clear that Jane’s parents were coercing her into having the abortion. Jane asked about adoption and wanted to leave the clinic but felt trapped. Heroically Jane left the clinic and chose life for her baby. One week after baby Manuel’s birth she graduated from high school. Manuel is the love of her life and we are so happy for her. What Jane needed was love and support from her family but when families won’t provide these things we will. Jane is a true hero and proof that young girls can choose life while continuing their own.

Baby Lillianna was actually born premature on April 3rd. She stayed in the hospital for several weeks before we got to meet her. Her mom Allison* came to us homeless and addicted to heroin. During the first part of Allison’s pregnancy we helped her with housing, food and transportation. One day we didn’t hear from her anymore. We didn’t know what happened to her or where she went she just stopped contacting us. We entrusted her and the baby to God hopeful we would one day meet again. God did take care of her and brought her back to us shortly before Lillianna was released from the hospital. She is clean and sober now, trying to do what is best for her daughter. Praises belong to God as we witness another woman facing adversity choose life.

Church Outside the Box
One thing that has amazed me doing outreach at abortion clinics, is the people you meet that are just passing by. Like any other ministry, when you take a step of faith and place yourself where God’s Spirit is moving, God will place you in the path of people desperately seeking Him and in need. Ministry outside an abortion clinic is so much more than dealing with abortion minded couples, it is about ministering to anyone in need. I have learned to take the church to the sidewalk and worship with our lives as living sacrifices, not just one day a week in a building, but everyday with the people that cross our paths.
This month, having a presence at the clinics provided opportunities to pray, serve, encourage, restore, and weep with people having nothing to do with abortion. God just knew our schedules, our hearts, and provided divine appointments on a sidewalk and the church without walls was lived out. One of the people I met was a girl who was struggling with addiction. She had been clean for the longest time in her life, but she wasn’t sure she could maintain her sobriety. She stated that she was a “back-slidden” Christian, and that she just didn’t feel comfortable in the “church scene.” One of our volunteers asked her if we could pray for her and if she was willing to be restored to Christ. The young woman said yes with all of her heart. We prayed and she stated that she knew God had placed us in her path and that she now had the strength from God to persevere. I encouraged her with 1 John 1:7 “But if we walk in the light, as he is in the light, we have fellowship with one another, and the blood of Jesus, his Son, purifies us from all sin.” I told her our Christian walk will not be a sinless one, but each time we fall and get back up it means we are still on the path. We just need to trust that Jesus’ blood is sufficient.
Another person I met on the sidewalk was a man who struggled with addiction as well. He had neurological issues and had been told he would never walk again. He walked with a limp, but he was walking. He said each day was a blessing and he was opening up to the possibility of the existence of God. I encouraged him and told him how much God loves him and that his life has tremendous purpose. I told him that God was waiting for him with open arms and encouraged him to seek God with all his heart in order to find Him. He came back to see me a week later and told me that he went to church for the first time that Sunday and felt right at home for the first time in his life.
Yet another person we met, was actually drawn to us while I was praying with a volunteer for the end of abortion in our community, New Mexico, the country and the world. He asked if he could use a cell phone to call his mom. He had just gotten off the bus from jail and needed his mom to pick him up. The woman I was praying with offered to drive him to his mothers house. He gratefully accepted. The next time we spoke, the woman shared that she prayed with the young man and invited him to church. That Sunday he partook of communion for the second time, his first time was in jail. She also bought him new clothes and he was very grateful.
The last story I want to share from this month involved a couple I spoke with as they were entering the late-term abortion clinic. The young girl turned and looked at me but continued inside. The young man (holding his three year old son) came over to talk with me. As soon as he walked over, I immediately recognized him from a few months back. At that time he told me he wasn’t there for himself, but that he had come with his sister. He assured me at that time that he and his girlfriend had a son, they were Christians and that they wouldn’t consider abortion for themselves but his sister insisted on an abortion.
What a difference a few months makes. This time he told me they were too young to have another child and didn’t have enough money to raise another child. We spoke for several minutes and I shared all the resources available to them. I also spoke with him about his Christian faith. I encouraged him as a father and told him to be strong for his family. He took our information and we prayed with him. After only 10 minutes in the clinic his girlfriend came back out and they left. I pray that God waters the seeds He used me to plant and that they make the right choice.
It doesn’t matter if you live in Albuquerque, New Mexico…Church you can join us this week, all week, for service and worship on the sidewalk outside of the abortion clinic in your community. Expect to meet Jesus there and expect some divine appointments.
…and those were only a few of the stories from church service this month! We’re excited to hear about your stories.