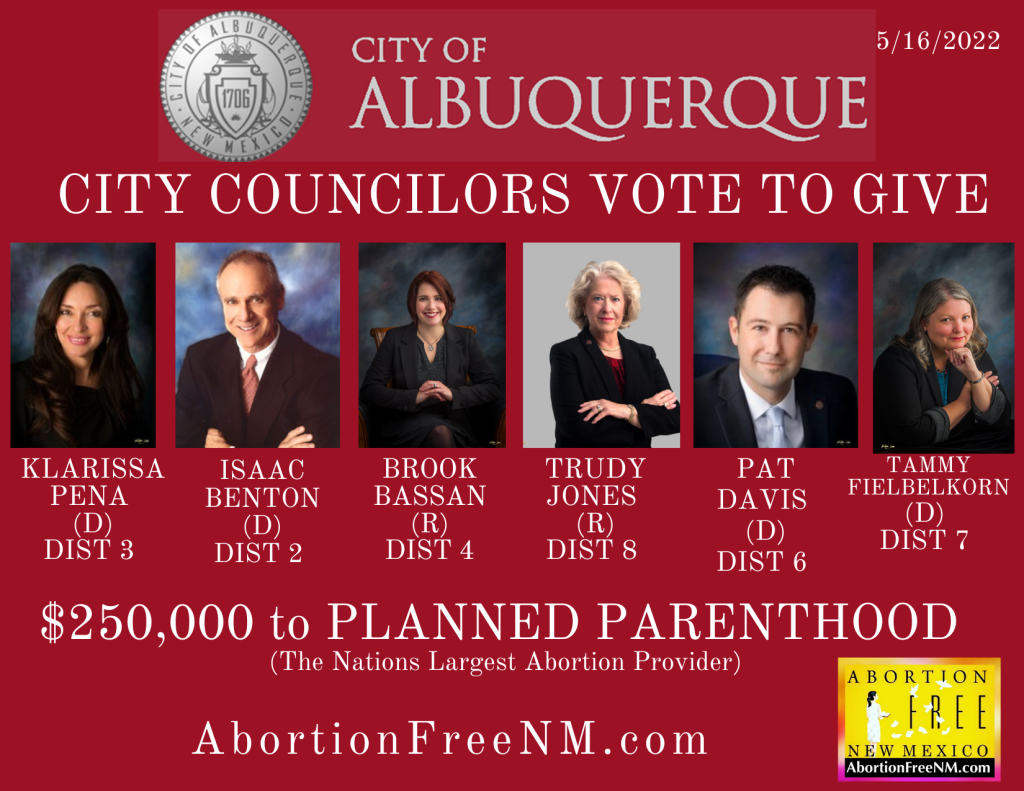 Albuquerque, New Mexico- In an unprecedented move the Albuquerque City Council voted on Monday night, May 16th to amend the City of Albuquerque’s Operating Budget to include $250,000 to Planned Parenthood of New Mexico.

In a 6-3 vote, two republican councilors, Brook Bassan and Trudy Jones, sided with pro-abortion liberal democrats and the abortion industry to approve the funding which will now be sent to democrat Mayor Tim Keller for his signature.

Planned Parenthood as a 501c3 nonprofit organization already receives hundreds of millions of federal tax dollars each year, in spite of the fact that most Americans don’t want their tax dollars being used to prop up the abortion giant. Planned Parenthood aborted 354,871 children in the 2019-2020 fiscal year.

In a press release sent from Julian Moya, public information officer for the Albuquerque City Council, it is noted that the $250,000 to Planned Parenthood is a “Council-directed sponsorship and was achieved by removing funds from other projects.”

“The city of Albuquerque is already in crisis mode so it is completely absurd that the city council is stripping the funding of other city projects to prop up a failing abortion industry that is on the verge of collapsing nationwide with the potential overturning of Roe v. Wade. The city of Albuquerque is facing so many crisis situations that it is absurd to give $250,000 to the nation’s largest abortion provider. The taxpayers of Albuquerque should not be forced to foot the bill for Planned Parenthood’s non-essential abortion business. Abortion is not healthcare for women and women don’t need Planned Parenthood. The Republican city councilors, Brook Bassan and Trudy Jones, who voted to appropriate these funds should resign immediately and publicly apologize to their constituents for not properly representing our fiscal or social conservative values.”

Abortion Free New Mexico urges you to contact councilors Bassan and Jones to express your disapproval of their actions and to urge them to resign immediately.