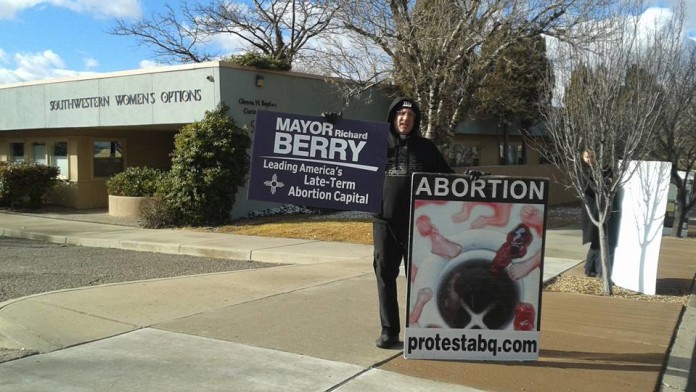 Protest ABQ and I began protesting Mayor Berry, who professes to be pro-life, in 2015 after his repeated refusals to meet with us about our concerns regarding the nature of the abortion industry in Albuquerque as well as the difficulty we were having obtaining information about 911 emergency calls coming from city abortion facilities. We also had concerns about abortion clinic zoning and other issues. Not only has the Mayor ignored our pleas to meet, but now it appears as if he is working with the abortion industry in Albuquerque.

“Pregnant” is a teen pregnancy documentary that debuted August 15th, 2015 at the Kimo theater. Led by the Mayor’s Youth Advisory Council, the 30 minute film was a combined effort of the City of Albuquerque, the NM Dept of Health, multiple pro-abortion organizations including Planned Parenthood, and University of New Mexico (UNM) abortionist Eve Espey.

Dr. Eve Espey is the Chair of the UNM Dept of OB-GYN and oversees UNM’s large, multifaceted abortion business under the direction of Dr Paul Roth, who is the CEO of the entire UNM Health System. Espey directs the UNM Center for Reproductive Health (abortion facility) and the UNM Young Women’s Health Clinic (which provides abortion related services for teens as young as 14 years old). Espey’s involvement in the NM abortion industry has been well documented over the years. Most recently she was the focus of an investigation by the New Mexico Alliance for Life who exposed that Espey entered into a number of dubious contracts with late term abortion doctor Curtis Boyd. NMAFL properly is calling for Espey’s termination.  I, as well as others, have called for the UNM Regents to do a full investigation of the UNM abortion business and to also terminate Dr. Paul Roth. Espey works directly for him and it is Roth who oversees every aspect of the abortion industry at UNM.

It is very telling that the self proclaimed pro-life mayor chose to work with the abortion industry in his teen initiatives; not the clergy or church, but those who profit from killing unborn children. ‘Pregnant’ detailed various sex education initiatives available to students through their school and the Department of Health. The documentary encourages parents to become comfortable enough with their children having sex to help them obtain contraception. Both kids and parents receive a brief lesson on new birth control methods besides the pill.  Espey is even given a segment to push her favorite method, the IUD.

Also featured in the film, pro-abortion doctor for the NM Dept of Health, Carletta Bullock, was given a special thanks and acknowledgement along with Espey immediately following Mayor Berry’s introduction at the Kimo screening. Also mentioned was, Lalita Russ of Planned Parenthood who appears to be involved in Planned Parenthood’s school based sex education programs. Both Bullock and Russ testified for the NM abortion industry against pro-life legislation at the Roundhouse during the 2015 legislative session. At the premier, Mayor Berry thanked Nirvana Mañana Institute for their contribution to the making of the documentary. Nirvana Mañana Institute partially funded “Pregnant” as well as the “After Tiller”  abortion documentary that glorified two of New Mexico’s third trimester abortion doctors employed at Curtis Boyd’s late term clinic.

More recently while Protest ABQ was protesting a radically pro-abortion Democrat Pat Davis, Mayor Berry made a video criticizing Protest ABQ’s 1st amendment tactics of showing the truth about the abortion industry.  In essence Berry was doing nothing more than endorsing Davis. I as well as others immediately pointed out that Berry should be as upset about the pre-born babies that are dying in his city because of people like Davis as he is about the use of images of these innocent aborted babies. In answer to criticism against him, the Mayor said he desired to meet with us. Our repeated requests for a meeting have always been met with silence.

Is Mayor Berry so entrenched in the NM abortion industry that he will continue to refuse to act on behalf of the babies dying in his city? ABQ will keep it’s reputation as the late term abortion capital of the nation so long as leaders like Mayor Berry refuse to act.

Listen to ABQ Mayor Richard Berry in his own words about how he helped work to get the Pregnant documentary made and thank Nirvana Mañana Institute here: ABQ Mayor RJ Berry Collaborates with and Endorses – Pregnant

Father Stephen is a priest with the Archdiocese of Santa Fe, ordained 10 years as a late life vocation. Fr Stephen has been given permission to do full-time national pro-life ministry and is currently a member of the Pastoral Staff of Priests for Life. Fr Stephen is the founder of several pro-life ministries including St Gerard’s CPC in Connecticut and Project Defending Life also Protest ABQ  in New Mexico.