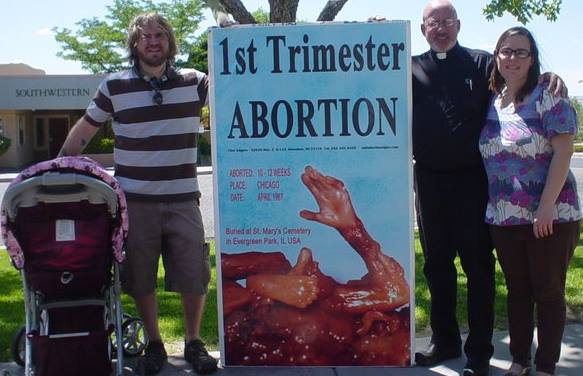 This Friday, I (PDL) will host an organizing meeting at Project Defending Life for a new campaign called Protest ABQ. Protest ABQ will be a ministry of Project Defending Life and will be a protest campaign utilizing graphic imaging and other means to send a message to the voters and leaders of ABQ (and NM) that their vote to kill babies and support baby killers will not be tolerated. This campaign is designed to end the baby killing in ABQ and in NM.

Everyone is welcome to join us if you support the use of graphic imaging to show the truth about abortion…i.e. baby killing! This meeting is to organize a campaign to protest ABQ and not to debate the merit of graphic imaging or the recent failed vote. It is time to move on past the vote and it is time to get serious about protesting the killing of our little brothers and sisters in the womb.

These protests will be peaceful and constitutionally legal. We will not condone violence of any kind by anyone in this campaign. Indeed, we are protesting the use of violence…against babies in the womb. We will peacefully protest this violence.

58. Among all the crimes which can be committed against life, procured abortion has characteristics making it particularly serious and deplorable. The Second Vatican Council defines abortion, together with infanticide, as an “unspeakable crime” But today, in many people’s consciences, the perception of its gravity has become progressively obscured. The acceptance of abortion in the popular mind, in behavior and even in law itself, is a telling sign of an extremely dangerous crisis of the moral sense, which is becoming more and more incapable of distinguishing between good and evil, even when the fundamental right to life is at stake. Given such a grave situation, we need now more than ever to have the courage to look the truth in the eye and to call things by their proper name, without yielding to convenient compromises or to the temptation of self-deception. In this regard the reproach of the Prophet is extremely straightforward: “Woe to those who call evil good and good evil, who put darkness for light and light for darkness” (Is 5:20). Especially in the case of abortion there is a widespread use of ambiguous terminology, such as “interruption of pregnancy”, which tends to hide abortion’s true nature and to attenuate its seriousness in public opinion. Perhaps this linguistic phenomenon is itself a symptom of an uneasiness of conscience. But no word has the power to change the reality of things: procured abortion is the deliberate and direct killing, by whatever means it is carried out, of a human being in the initial phase of his or her existence, extending from conception to birth. The moral gravity of procured abortion is apparent in all its truth if we recognize that we are dealing with murder…