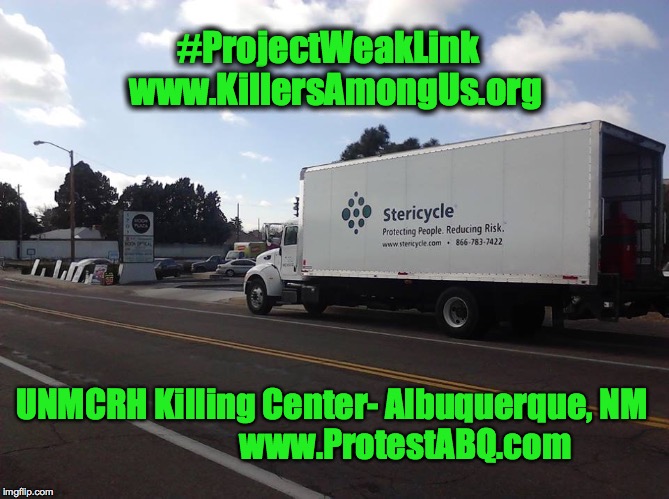 ​We are Proud to join Created Equal In This National Effort

Bud Shaver, Executive Director of Protest ABQ issued the following statement, “Now is the opportune time for all of the pro-life organizations across the country to be more strategic and unify our efforts in opposition to Planned Parenthood and the rest of the Abortion Cartel nationwide. Protest ABQ is proud to join Created Equal in exposing the abortion industry’s weak link…With every serial murderer, their biggest problem becomes, ‘What do I do with all of the dead bodies?'”

In December, videos of the 2013 National Abortion Federation conference were released by GotNews showing abortionist Renee Chelian saying, “We are all one incineration company away from being closed.”
​
Her admission shed light on the weak link of the abortion industry and specifically Planned Parenthood (i.e. medical waste companies). Abortionists depend on them to dispose of their victims’ bodies.

In undercover videos leaked by GotNews of a 2013 National Abortion Federation conference, Abortionist Renee Chelian discusses the problem of disposing of aborted babies. While proposing solutions she comments, “I had five months’ worth of fetal tissue in my freezers.”

Stericycle’s collaboration with Planned Parenthood and the abortion industry through its collection, transportation, and disposal of aborted children and the instruments used to kill them is well documented (see Evidence). Providing this service enables the killing of preborn children. Planned Parenthood depends upon medical waste companies to dispose of dead babies.

Question: What if Stericycle were to stop doing the dirty work of Planned Parenthood?

Last summer and fall, Created Equal helped lead 100,000 activists to protest at over 600 Planned Parenthood clinics in each of the fifty states.  This coalition is capable of mounting serious opposition to Stericycle (See ProtestPP.com).

If we don’t act NOW to pressure these medical waste companies to sever agreements with Planned Parenthood, we will have missed a historic opportunity to stop the killing.

Important note:
Despite being caught red-handed by the Ohio Attorney General, Selin Hoboy, Vice-President of Legislative and Regulatory Affairs, has said that Stericycle “does not accept fetuses” in accordance to their Regulated Medical Waste Acceptance Policy. This is merely a semantic ploy.

According to the policy, Stericycle will not accept “complete human remains,” which includes fetuses. However, babies are not “complete” after being dismembered, decapitated, and disemboweled in standard abortion methods. Their broken parts and torn tissue are categorized by Stericycle as “pathological waste”—defined as “human or animal parts, organs, tissues, and surgical specimens”—which they do accept. So while they may not be picking up intact fetuses, they do accept aborted babies’ fragmented body parts. Stericycle uses this technical exemption to justify their continued collaboration in child-killing.

Don’t allow Stericycle to get away with the lie that they don’t dispose of aborted babies for Planned Parenthood or other abortion providers.