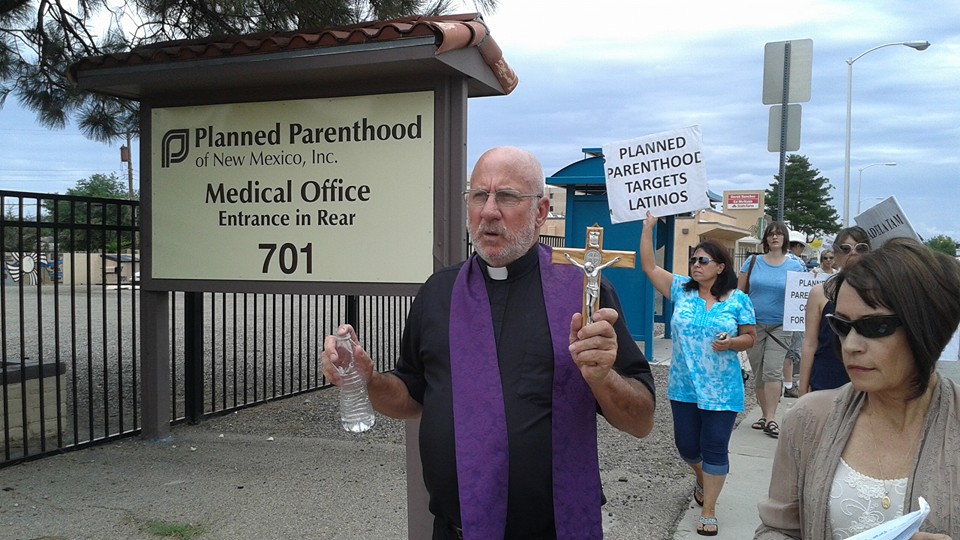 By Tara ShaverAlbuquerque, NM- On August 22nd over 40 pro-life organizations across the nation will join together for protest at local Planned Parenthood killing centers. Protest ABQ is a sponsor of this event and will be co-leading the Albuquerque protest with Fr. Stephen Imbarrato of Priests for Life at Planned Parenthood surgical center in Albuquerque.

Last week, Protest ABQ filed a formal criminal complaint with the Attorney General of New Mexico and two consent forms, one obtained by Pro-Life Witness from 2012 and a newly obtained consent form, which was obtained by Protest ABQ,  this year 2015 from Southwestern Women’s Options (SWO) were submitted as proof of their violation of New Mexico law by using aborted baby body parts in medical research.

In response to the #WomenBetrayed rally and press conference hosted by Fr. Imbarrato and Protest ABQ on July 28th at the Santa Fe Capital building, Gov. Susana Martinez joined several national governors from all across the nation demanding an investigation of Planned Parenthood at the Federal level.In an article that appeared on the front page of the Albuquerque Journal the following day, Gov. Martinez’s office “put out a statement reiterating that the governor ‘is pro-life.’ She ‘has followed this issue very closely, and she is appalled by the practices alleged in the recent videos. She supports Congress investigating this issue,’ spokesman Michael Lonergan said.”

In an article published on July 30, 2015 by the NM Political Report Rep. Rod Montoya, R-Farmington, said he is requesting an investigation of Planned Parenthood by Attorney General Hector Balderas stating, “I am currently drafting a request for the Attorney General to investigate Planned Parenthood and their operations in New Mexico,” Montoya wrote in an email. “I am also looking into legislative options for the upcoming 30 day session.”

In addition, on July 30th, the Bishops of New Mexico issued a statement urging “the civil authorities of our State to be vigilant that these practices of the sale of fetal tissue do not happen in New Mexico.” To read the full statement click here.

“It is encouraging that both civil and religious leaders are speaking up in New Mexico and are calling for both local and federal investigations of abortion facilities to make sure that the inhumane practice of harvesting and selling baby body parts isn’t occurring. At least one New Mexico abortion facility, Southwestern Women’s Options, is involved in this illegal activity. It’s imperative that protests continue until these places of death are all shut down.” stated Bud Shaver, Executive Director of Protest ABQ.

Please join us on August 22nd as we protest Planned Parenthood in Albuquerque.