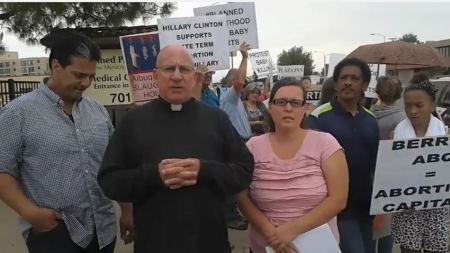 Albuquerque, NM- As news of Planned Parenthood’s illegal and inhumane practice of selling aborted baby organs, tissue and extremities has gone viral, here in the late term abortion capital of the nation we are calling for an investigation to make sure this isn’t happening here. It is a federal crime to sell body parts, even those taken from an aborted baby.

This ground breaking research about Planned Parenthood’s involvement in illegally selling baby body parts has given the pro-life community in New Mexico new concerns about what is likely happening inside the largest late term abortion clinic outside of communist China, Southwestern Women’s Options.

Members of Protest ABQ have Southwestern Women’s Options informed consent paperwork that every abortion patient must sign indicating that “tissue and parts will be removed during the procedure, and I consent to their examination and their use in medical research and their disposal by the clinic and/or physician in the manner they deem appropriate.” This agreement is mandatory, it’s not optional.

New Mexico has it’s own law on the matter that prohibits the selling of body parts.The Jonathan Spradling Revised Uniform Anatomical Gift Act Section 24-6B-2 excludes aborted babies as decedents (section D.) who are capable of making an anatomical gift who can donate their organs and tissues for “transplantation, therapy, research or education.”

“The selling of baby body parts after an abortion is worthy of protest and the pro-life community stood strong together on Friday, July 17, 2015 outside of Planned Parenthood to peacefully protest this horrific and inhumane practice,” stated Bud Shaver, Executive Director of Protest ABQ.

Over 100 people protested the fact that ‪#‎PPSellsBabyParts‬!

The pro-life community demands answers about whether or not pre-born children are being born alive to harvest organs in the latest stages of pregnancy in Albuquerque. “Specimens” must be digoxin free in order to be sold, digoxin is the drug that is used to cause a fetal heart attack in 2nd and 3rd trimester abortions. Either these babies are being partially birthed (partial birth abortions are illegal) and then killed or they are being born alive and then killed after which their organs, tissue and extremities are being harvested and sold for profit.

Please continue to call both the AG and the Governor with the following points:

-NM is home to the largest late term abortion facility in the nation where babies are killed up to the day of birth.

-This facility’s own consent form mandates that women agree to the use of their babies bodies to be used for medical research.

-At least 5 other states have launched investigations to ensure that this practice of harvesting and selling aborted baby body parts are not occurring in their jurisdiction.

-The Attorney General has a duty to uphold the laws of New Mexico and the United States, this issue is in his jurisdiction.