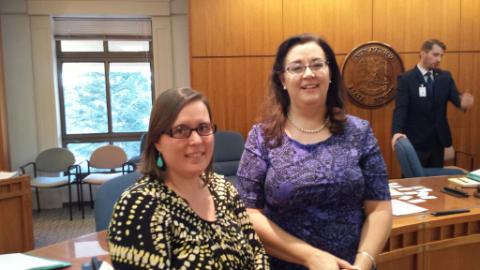 Pino played politics from the outset of this particular Senate hearing by pushing the pro-life bill SB 437 dead last (even though it was scheduled 4th in line). The bill was finally heard at 10:30pm.

SB 437 had been “rolled over” from a previous date due to an appendicitis attack suffered by Senator Gay Kernan (R). Due to the shenanigans of Sen. Pino, Sen. Kernan was not able to stay and hear SB 437 since she was in severe pain and physically not able to endure the long night.

Chairman Pino also cut off the testimony of expert witness Tara Shaver, Senior Policy Advisor of Protest ABQ when she attempted to introduce 911 calls made from Albuquerque abortion facilities. Sen. Pino objected and threw a “tantrum,” claiming that the 911 calls were “too emotional” when Sen. Brandt asked for the 911 calls to be played, which documented severe injuries sustained by women from Albuquerque abortion clinics.

Tara Shaver issued the following statement after the committee hearing, “When facts are disregarded as emotion you know there’s a problem. Quote of the night ‘women need and want [to kill their children by] abortion.’ There you have it my friends: insanity. Hospital privilege bill was tabled and hearts were exposed. Jesus is Lord and that’s where I cast my crown.”

Michael Norton, of Alliance Defending Freedom, was planning on attending the hearing last Friday but was not able to make it tonight. Here is an excerpt of the testimony he submitted to the committee members:

Alliance Defending Freedom (ADF) is pleased to represent Protest Albuquerque in regard to its support of Senate Bill 437.

ADF is an alliance-building, non-profit legal organization that promotes religious liberty, sanctity of life, marriage and the family. While ADF itself does not engage in lobbying, ADF is able to explain the legal impact of a legislative proposal.

That is why Protest Albuquerque urges you to pass Senator Brandt’s bill – Senate Bill 437. SB 437 would require that a physician may not perform or induce an abortion unless that physician has active admitting privileges at a hospital within 30 miles of the location at which the abortion is to be performed or induced. Violation of this provision of SB 437 is punishable as a misdemeanor crime which carries only a fine of $1,000.

SB 437 is important to the health and safety of women of New Mexico.

-It acknowledges the critical need for there to be continuity of care by the physician who performed the abortion to the patient in the event of post-abortion complications.

-It would enhance doctor-patient communications and the transfer of information about the patient and the post-abortion complications problems the patient is experiencing.

-It would support the ethical duty of the abortionist to care for the physician’s patient and not engage in patient abandonment.

-It would assure that there was a thorough evaluation mechanism of the abortion doctor’s competency to practice medicine and better protect patient safety.”

Several members of the public endured the LONG night and circus atmosphere and testified in support of the pro-life bill. Cliff Severson, 40 Days For Life Coordinator of Rio Rancho and also proud member of Protest ABQ, shared his testimony of personally witnessing two ambulances transporting injured women from the late-term abortion clinic, Southwestern Women’s Options. He urged the committee to pass the bill to provide a measure of safety protocols for New Mexico women.

Alan Sanchez, spokesman for the three Bishops of New Mexico urged the committee members to pass the bill stating that, “the Archdiocese of Santa Fe fully supports this bill.”

Sen. Pino continued his belligerent attitude by throwing out a supporter of the bill after his testimony!

Needless to say the Democrats voted on party lines to kill SB 437!

We would like to thank Sen. Craig Brandt of Rio Rancho for introducing and sponsoring this bill and for his patience and graceful attitude that he displayed through this long ordeal.