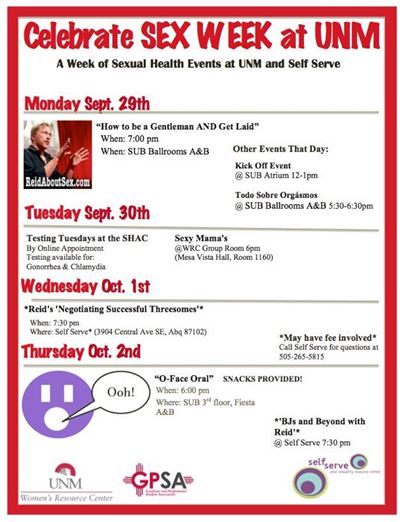 Albuquerque, NM- The University of New Mexico is hosting it’s first ever “Sex Week” starting today. The store manager at Self Serve Sexuality Resource Center in Albuquerque is collaborating with the on campus Women’s Resource Center to organize this weeks events.

This year’s theme is said to be preventing sexual assault but the events are being promoted to celebrate shame free sex with seminars titled “How to be a Gentleman AND Get Laid” and “Reid’s Negotiating Successful Threesomes.”

UNM has had a history of sexual assaults; the most recent accusation came from a student earlier this year. In July 2014 the ABQ Journal Newspaper reported that “According to UNM’s website, where its stats are posted, two sexual assaults were reported in 2008; six in 2009; two in both 2010 and 2011; and four in 2012. Numbers for 2013 will come out around September, according to Lt. Tim Stump, public information officer for UNM police”.

However, 1 in 5 students nationwide – usually female – are sexually assaulted during their college years. There is a disturbing trend on college campuses and cases of sexual assault. Over sexualizing students does not seem to be a positive preventative method. This week’s events will likely only drive students to be more sexually active and creates a climate on campus, which results in heightened sexual assault, sexually transmitted diseases, unplanned pregnancies and inevitably abortion.

While these events are getting a varied response from students on campus, the general public should be asking UNM, “Why we the tax payer should be forced to fund such activities at a public institution?”

Please contact the UNM President and Dean of Students and respectfully tell them that UNM should not be sexualizing students on the taxpayer’s dime and allowing a climate to be created with which sexual assaults can arise.

Also be sure to check out this great article published in the UNM Daily Lobo, “University is no place to discuss sexual behavior” by Sade Patterson, Vice President of Students for Life

More dysfunction at UNM: Lobos of Death: A Look at the Radical Abortion Agenda at the University of New Mexico