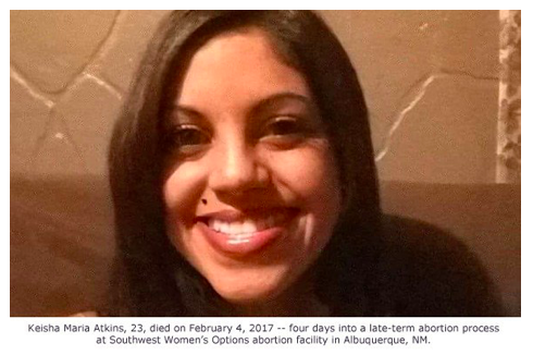 By Micaiah Bilger, (This article originally appeared on LifeNews.com)

Albuquerque, New Mexico- Lawyers for the late Keisha Atkins, who died along with her unborn baby after a late-term abortion in New Mexico, achieved a victory this spring when the University of New Mexico agreed to pay a settlement in the case.

​The pro-life organization Abortion on Trial said the university paid Atkins’ estate $365,000 after the UNM hospital was accused of negligently referring her to a late-term abortion facility that led to her death.

UNM should have never referred Keisha to Curtis Boyd’s outpatient abortion facility, Southwestern Women’s Options,” said Jamie Jeffries, executive director at Abortion On Trial. “It is unacceptable medical care to perform an induction abortion outside of a hospital. Practitioners everywhere should be aware that referring women to private abortion clinics can result in legal action and subsequent liability.”

In 2017, Atkins, 23, died shortly after her unborn baby was aborted at Southwestern Women’s Options in Albuquerque; she was six months pregnant. Her lawyers said she died of sepsis after the abortion facility gave her “inconsistent and dangerously addictive drugs for days” and delayed transporting her to a hospital.

Jeffries said Atkins’ elective, late-term abortion was paid for by New Mexico taxpayers through Medicaid, and the settlement also will be paid for by taxpayers because the University of New Mexico is a public institution.
​
Attorney Mike Seibel with Abortion on Trial said they donated part of their attorneys’ fees from the settlement to help other mothers and babies in need.

Of the attorneys’ fees generated from the UNM $365000 settlement, I donated a good amount to pregnancy centers, sidewalk advocates, pro-life candidates and pro-life causes,” Seibel told the Pinon Post. “The money man intended to use for evil God turned to good. It’s time to win this battle.”

The case has prompted calls for state lawmakers to enact new safety regulations for abortion facilities. New Mexico has almost no regulations or restrictions on abortion. It does not require women to be informed of abortion risks or alternatives before an abortion, and it allows unborn babies to be aborted for any reason up to birth.

“The New Mexico Legislature has chosen many times to ignore the safety of the mother during a late term abortion,” state Rep. Rebecca Dow, R-Grant, said in a statement provided to LifeNews. “While I believe there are many alternatives to abortion, the simple truth is that a woman who opts to receive an abortion should receive the same information of the risks of the procedure that is afforded in every other medical environment.”

According to KOB News 4, Atkins went to the abortion facility Feb. 1, 2017, where her unborn baby was aborted. She was about six months pregnant.

The lawsuit accused the University of New Mexico Hospital and Southwestern Women’s Options of medical malpractice, wrongful death and civil conspiracy in the lawsuit.

Operation Rescue and Abortion Free New Mexico also suspected a cover-up. The groups obtained Atkins’ autopsy report along with a CAD printout of a 911 call from the abortion facility on the date of Atkins’ death. The groups said both documents raised serious questions about the mishandling of Atkins’ medical emergency, and aroused suspicions of an attempted cover-up involving the hospital, with which lead abortionist Curtis Boyd is connected.