​Albuquerque, New Mexico- Abortion Free New Mexico is calling for prayer each day leading up to Wednesday, December 1st when the U.S. Supreme Court will hear the Dobbs v. Jackson Women’s Health court case. This case has the potential to cripple the abortion industry nationwide by finally overturning Roe v. Wade. On that day Abortion Free New Mexico and Off The Cuff ABQ Talk Radio are hosting a “Overturn Roe Prayer Rally” starting at 10AM at Tiguex Park in Albuquerque located at 1800 Mountain Rd. NW.

According to OverturnRoe.org, “Three outcomes are possible:

New Mexico’s late term abortion industry exists because of the lack of state laws protecting women and children from the violence of abortion. Albuquerque in particular is the state’s stronghold as it is home to the only three surgical abortion facilities in the state. Of key importance is also the makeup of New Mexico’s legislature and Supreme Court in the event that this issue is returned to the states after the removal of Roe v Wade.

Let’s join together over the next week in collective unified prayer on behalf of our nation keeping in mind how much New Mexico has to gain from a positive ruling coming down from the highest court in the land.
​
In Matthew 17:21, Jesus tells his disciples why they were unable to cast out a particular demonic stronghold when he said, “But this kind does not go out except by prayer and fasting.”Abortion Free New Mexico is encouraging those who feel so led to include fasting during this week of prayer. A few options of fasting are, consuming only bread and water on the day you fast, no food from sunrise to sunset or you may choose participate in a partial fast (for half the day or from a single meal) or to fast from one thing (not just food). There is flexibility and freedom when it comes to fasting, but be assured that according to Jesus’ teaching to his disciples, it makes our prayers more powerful when the two spiritual disciplines are combined.

See below for today’s focus and scripture. 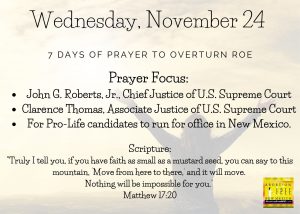 7 Days of Prayer, Leading U… by Bud Shaver