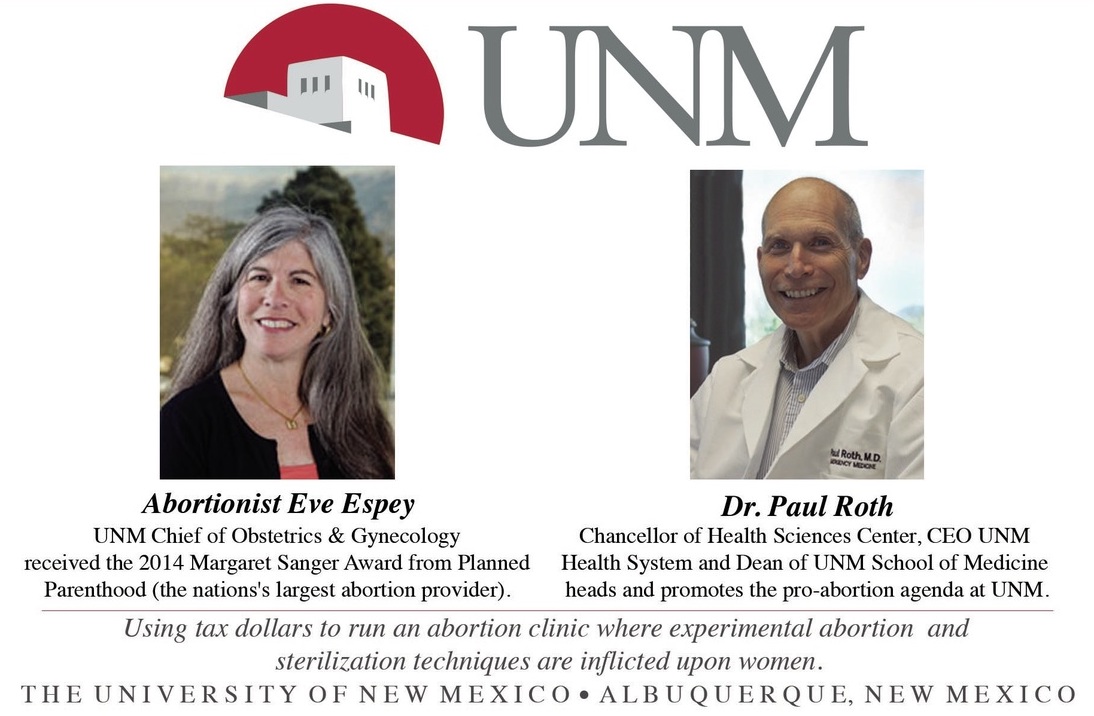 Albuquerque, NM- The Select Panel on Infant Lives has issued their final 471 page report after a year long in depth investigation into the trafficking of aborted fetal remains throughout the nation. This investigation has uncovered so much and produced vital information that has culminated in various criminal referrals  including to our own New Mexico Attorney General.

Protest ABQ applauds the work of the House Select Panel and would also like to acknowledge the real unsung heroes of this entire investigation, our friends and mentors Troy Newman and Cheryl Sullenger. This report vindicates decades of their tireless research revealing abortion abuses nationwide. In fact, it was Operation Rescue who deployed us to New Mexico in 2010 and have collaborated with us on various projects and the filing of subsequent complaints that have helped lay the foundation for the break through of exposure that has taken place.

“In 2011 when we published our first article exposing the University of New Mexico’s (UNM) radical abortion agenda, we had no idea that 5 years later New Mexico would be at the heart of a congressional investigation. Little did we know that the congressional panel would validate what we have said all along, that UNM is the heart of the abortion cartel in the state and that late term abortions are a common occurrence in our city of Albuquerque. We remember the days when we first arrived in New Mexico and very few people believed that late term abortions occurred let alone that UNM was involved in moving forward a radical abortion agenda,” stated Bud Shaver, Executive Director of Protest ABQ.

The Panel’s investigation revealed in part, the following:

– The Panel identified several research institutions across the United States, mostly state universities and virtually all recipients of federal as well as state funding, that have formed a close relationship with one or more abortion clinics.

– The transfer of fetal tissue from Southwestern Women’s Options (SWWO) to UNM was one part of an aggressive campaign under which leadership personnel at UNM medical school: (1) expanded UNM’s role both in providing abortions and in training new abortion providers; (2) expanded UNM’s referral for abortion services to outside clinics, including the clinic from which it obtained fetal tissue;

– Abortionist Eve Espey, who is described by the panel as the “arguably most responsible for making UNM an abortion provider” refused to answer questions about UNM’s own protocol regarding babies born alive during abortions. This policy states that “When an induced abortion results in a live-born infant showing any signs of life, such as a heartbeat or voluntary movement, a birth certificate should be completed. . . . A death certificate will be completed if the infant dies.”

[Essentially, even though the Born-Alive Infants Protection Act provides protections for babies who survive abortions, Espey who is chair of the OBGYN department at UNM stated that she was not familiar with the law and didn’t see it’s relevance to her practice. ]

– It also found that the transfer of fetal tissue from SWWO to UNM for research purposes is a systematic violation of New Mexico’s Spradling Act, under which tissue from aborted infants cannot be anatomical gifts.” According to the panel’s evaluation, “The Spradling Act was enacted in 2007 to replace the State’s existing Anatomical Gift Act  with provisions mirroring the The Uniform Anatomical Gift Act (UAGA). In their new law, New Mexico decided to follow the suggestion in the UAGA to treat aborted fetuses differently: “‘decedent’ means a deceased individual whose body or part is or may be the source of an anatomical gift.” It “includes a stillborn infant and …a fetus but (does) not includ(e) a fetus that is the subject of an induced abortion.”

– Virtually every entity and individual from whom the Panel sought documents did not fully comply, regardless of whether the documents were required to be produced pursuant to a subpoena, or were requested via a letter.

– Scientific societies and universities have made misleading claims about fetal tissue research. Human fetal tissue constitutes only a tiny fraction of the overall research effort. Moreover, research involving human fetal tissue is less productive and has lower importance/impact when compared to non-fetal research from the same laboratories.”  [Note: This is a justification that UNM uses which according to the panel’s research, fetal tissue research has not produced, nor is it necessary, to bring about the greatest impact and advances.]

The House Select Panel also included recommendations in this final report that include but are not limited to, defunding Planned Parenthood of government funding and passing a law to ban abortions after 20 weeks.

The University of New Mexico is a publicly funded institution and as such taxpayers should be afforded transparency and accountability in light of the panel’s findings and criminal referral to the New Mexico Attorney General. Protest ABQ has launched a campaign to urge Attorney General Hector Balderas to investigate and prosecute SWO and UNM. We have sent postcards throughout the state alerting constituents that he has two criminal complaints on his desk and has been unresponsive as to the status of these complaints. It is our hope that justice will finally be served on behalf of the ultimate victims of abortion, the pre-born children.