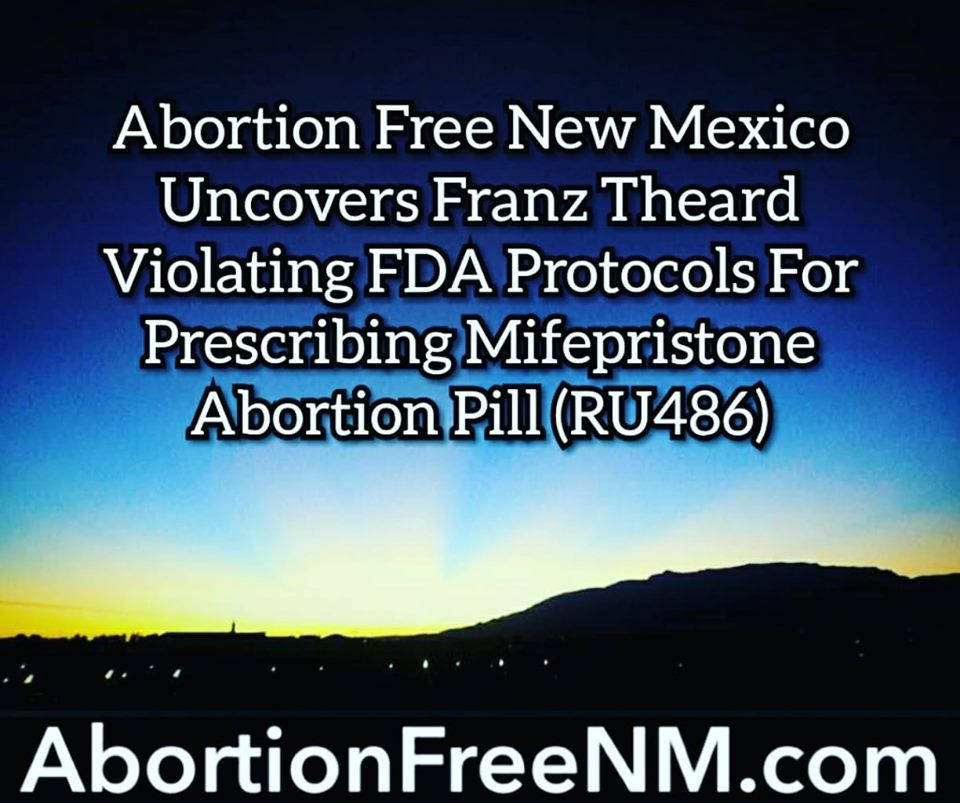 Albuquerque, NM- Abortion Free New Mexico has filed a joint complaint with local pro-life activist, Leisha Armijo Martin against abortionist Franz Theard (who operates at Hilltop Reproductive Health Clinic in Santa Teresa, New Mexico) with the Food and Drug Administration (FDA) and other federal and state agencies regarding a violation of the Risk and Evaluation and Mitigation Strategies (REMS) and prescriber agreement for the drug Mifeprex, also known as Mifepristone and the RU486 abortion pill.

Risk and Evaluation and Mitigation Strategies (REMS) are required by the FDA, for the use of certain medications that carry a significant risk or, in the FDA’s own language, have inherent “serious safety concerns,” in order to mitigate some of that risk. As of December 31, 2018, there have been 24-reported  deaths connected with Mifeprex (Mifepristone) use. Two of these deaths were attributed to ectopic pregnancies resulting in death.

Mifepristone is the drug used on the first day of chemical abortion procedures which blocks progesterone, a necessary hormone during pregnancy. The blockage of progesterone essentially starves the newly formed baby of vital nutrients needed to survive. A second drug called misoprostol is given up to 48 hours later which causes cramping, bleeding and the ultimate loss of the pre-born child if there is no intervention. Some RU486 abortions can now be reversed if progesterone is supplemented throughout the remainder of the pregnancy.

In an undercover investigation, Abortion Free New Mexico called Hilltop Women’s Reproductive Clinic in Santa Teresa, New Mexico to determine whether or not they are compliant with the prescriber agreement required by the FDA to prescribe Mifeprex (Mifepristone). According to the receptionist, abortionist Franz Theard does not have the proper ultrasound to diagnose ectopic pregnancies, which is a clear violation of the REMS requirements. As outlined in the FDA approved REMS document, prescribers of the abortion drug, Mifeprex (Mifepristone) must have the “ability to diagnose ectopic pregnancies.”

In the call to Hilltop Women’s Reproductive Clinic, the caller asks, “Are you guys able to detect like an ectopic pregnancy if I came in for a procedure there?”

In the recorded phone call to Hilltop, the abortionist who performs the abortions, in clear violation of the FDA’s requirements, is identified as, “Doctor [Franz] Theard.”

Despite the fact that Franz Theard is unable to detect and diagnose ectopic pregnancies, he is still prescribing Mifeprex (Mifepristone) and performing medical abortions up to 9 weeks gestation.

In the FDA complaint filed by Shaver and Armijo-Martin they request, “that the Sponsors (drug manufacturers) ensure that they have on file, a current, signed prescriber agreement form for Franz Theard M.D. who operates at Hilltop Women’s Reproductive Clinic located at, 5290 McNutt Road Suite 106, Santa Teresa, NM 88008 and ensure compliance prior to dispensing the drug to the dispensers in question. We are also requesting an FDA-audit on both the suppliers and the prescribers to the ensure safety of the consumers.”

The Weak Link: An Abortion pill mill that is violating FDA requirements

Hilltop’s website boasts that, “New Mexico does not have any of the major types of abortion restrictions regarding mandated parental involvement or limitations on publicly funded abortions—often found in other states.” This makes it so easy for Theard to instruct minors in Texas who don’t want their parents to know they are pregnant to cross state lines to obtain abortions using drugs that have long list of side effects and life threatening complications.

“Franz Theard is placing the lives of minors in jeopardy when he prescribes Mifepristone, the abortion pill, to his patients in Santa Teresa, New Mexico. He is doing this in violation of FDA requirements that are in place because this drug poses such a threat to the women who are receiving it. An ectopic pregnancy is usually diagnosed by a physician who then provides continuity of care to them, but abortion facilities simply aren’t in business to provide legitimate healthcare that protects both mom and baby, instead the lives of both are held in the balance. It is our hope that the FDA and other responsible agencies, as a result of our complaint, will investigate and act swiftly to make sure that Theard is no longer able to receive and administer Mifepristone, the deadly abortion drug, in southern New Mexico.”

The Double Life of Franz Theard

Abortionist Franz Theard performs abortions in New Mexico and El Paso, Texas at Hilltop Women’s Reproductive Services. He also has an OBGYN practice just down the street from his El Paso abortion center where he does surgical abortions up to 15 weeks of pregnancy. Even though he went to school to become an OBGYN, just 4 years after Theard received his medical license he began performing abortions in the El Paso area. Theard has maintained hospital admitting privileges at two El Paso hospitals over the years, The Hospitals of Providence and Las Palmas Del Sol Healthcare.

Theard is caught in between two worlds and at some point they will collide. In fact, Theard’s dirty little secret isn’t completely under the radar as locals have informed Abortion Free New Mexico that Theard has been called to the hospital to assist with the delivery of a baby, but those in the community who know that he is an abortionist have refused to allow him to do so.

If these hospitals are only just now finding out about Theard’s abortion businesses, will they want to keep him in good standing? Will Theard be faced with a decision, to kill babies or bring them into this world?