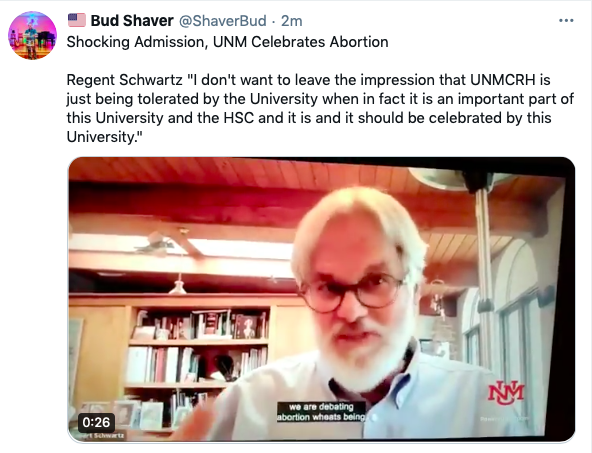 Albuquerque, New Mexico- In a shocking admission, University of New Mexico (UNM) Regent Robert Schwartz celebrates UNM’s participation in the killing of babies up to 24 weeks old in the womb and designated those who perform these late term abortions as heroes above those in the medical community who actually work to save lives every day. This occurred during a bi-monthly virtual Board of Regents Meeting where local concerned citizens spoke out against this atrocity.

​and Stephen Harrington, a concerned pro-life UNM alumnus of the “Anderson School of Business” (class of 1983) addressed the UNM Board of Regents regarding not only the University of New Mexico’s persistence in maintaining their free-standing late term abortion facility, Center for Reproductive Health (UNMCRH), but also due to the offensive  “Heroes Work Here” banner that has drawn attention and criticism from the pro-life community.

For years Abortion Free New Mexico has worked to expose the radical abortion agenda stemming from UNM. From promoting embryonic stem cell research to recruiting and training the next generation of abortionists, UNM is at the heart of the New Mexico abortion cartel. This publicly funded institution utilizes tax dollars for their programs and for this reason it is time for the members of the community to speak directly to UNM leadership to express their concerns and demand that this extremist agenda is halted.

Stephen Harrington’s statement to the UNM Board of Regents reads,

“I will be speaking as a concerned alumnus today. It has come to my attention that UNM is operating and funding an abortion clinic. It is located off campus near the airport. They perform late term abortions at this facility. I think it is reprehensible that UNM is using tax dollars to keep this clinic open. Included in this money may be the generous donations of UNM alumni. You and you alone, the Regents, have the power to put a stop to this appalling practice by closing this clinic. On the building is a sign that reads, ‘Heroes Work Here.’ I firmly believe in and support our frontline workers who tirelessly strive to save lives. However, abortionists and their aides do not save lives. In fact, they take lives. Webster’s defines ‘hero’ as, ‘A person admired for achievements and noble qualities.’ This does not define the workers of this clinic. I would like to ask that you have this sign removed immediately. I thank you for allowing me the time to speak to you today and ask that you carefully consider my recommendations.”

In His Own Words

In response to the passionate public comments during this meeting, Regent Robert Schwartz expressed his position of support for UNM’s extreme abortion agenda. Do his comments reflect the entire Board of Regents as well as UNM President Garnett Stokes who was also present during the virtual meeting?

Regent Schwartz “I don’t want to leave the impression that UNMCRH is just being tolerated by the University when in fact it is an important part of this University and the HSC and it is and it should be celebrated by this University.” pic.twitter.com/KGU9UrzATt

​Listen to his full comments here.

For UNM Regent Robert Schwartz, the debate is settled at UNM and it appears that while UNM is facing a 14 million dollar deficit they would rather use the tax dollars UNM receives and the generous donations from UNM alumni and others to fund their radical abortion agenda instead of their football program.

​According to the UNM Daily Lobo,

“UNM Regent Robert Schwartz has been outspoken about his concerns regarding the sustainability of the football program.

‘I think this issue is going to keep on coming back, and we are either going to have to cut the athletic budget at least to some extent or we are going to cut the academic budget, because there are not enough resources to cover everything across the board,’ Schwartz said.”

If that wasn’t enough, a UNM graduate student slammed the university on Tuesday during the public comments stating,

“I really love UNM,” however, she continued, “but it feels like UNM doesn’t love me back!”

She went on to complain that the post graduate cost of living is $22,000 per year but UNM only pays her and fellow student teachers $14,000 a year!

UNM grad student loves UNM but doesn’t feel like UNM loves her back. The post graduate cost of living is $22,000 per year but UNM only pays these student teachers $14,000 a year!

Meanwhile the medical director of UNMCRH abortion center is one of the highest paid at $505,388! pic.twitter.com/GInthX6TPU

Meanwhile, the medical director of UNM Center for Reproductive Health abortion center, Eve Espey, is one of the highest paid employees receiving an annual salary of $505,388! In 2014, Eve Espey, was awarded the Margaret Sanger Award for her eugenic population control efforts at UNM targeting the Hispanic population.

“Unfortunately, Regent Schwartz demonstrated with his comments that he places the killing of innocent babies in the womb as a top priority for the University of New Mexico. Schwartz claims that the The Center for Reproductive Health offers so much to the state but, in fact, it is not providing any services that cannot be obtained elsewhere. There is no extraordinarily good reproductive health care as Schwartz asserts because abortion is not health care, it is focused instead on terminating children in the womb and preventing reproduction.

Family planning services, birth control and abortion are nothing more than a means to promoting a culture of eugenics and death in New Mexico. UNM should work to dismantle this facility and renew it’s vision to truly provide excellence in education, patient care and research, have respect and compassion for all people, even the unborn, and to provide hope for those they serve, especially pregnant women who need love and support not abortions.”

If you haven’t already please sign our petition to contact the University of New Mexico (UNM) President Garnett Stokes, UNM Regents, and the UNM Medical Group. When you sign it, an email will automatically be sent to each of them: 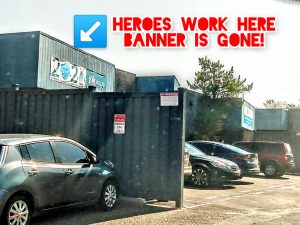