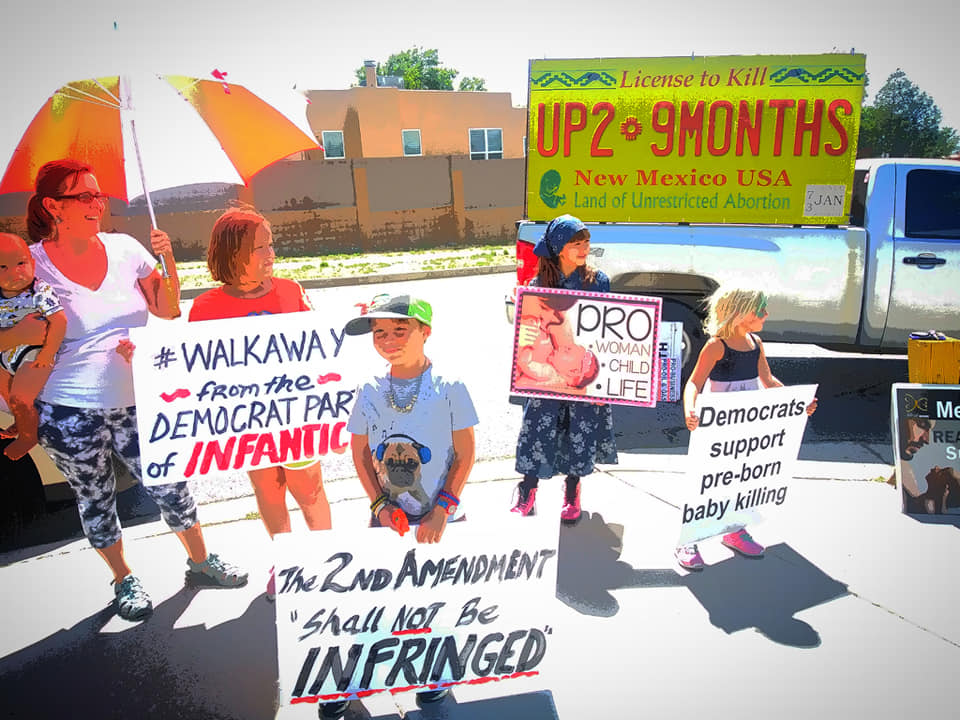 ​Albuquerque, NM- Abortion Free New Mexico and the ABQ Tea Party will be protesting during the Democrat watch party being hosted in Albuquerque, New Mexico at Kelly’s Brew Pub from 5:30-6:30pm both nights: Tuesday July 30, 2019 and Wednesday July 31, 2019!

“Abortion Free New Mexico and the Albuquerque (ABQ) Tea Party are hitting the ground running this campaign season to protest pro-abortion candidates and the party of death! If democrat candidates will not publicly disavow abortion and commit to supporting pro-life legislation in New Mexico then they should expect to be protested!”

Created Equal and a coalition of Pro-life activist groups have announced that they will be protesting the Democratic debate on location in Detroit, Michigan this week on July 30th and 31st. Abortion Free New Mexico will be standing in solidarity with them by protesting the Democrat watch party hosted by Indivisible Nob Hill in Albuquerque!

ACCORDING TO CREATED EQUAL, Here are the platforms these democrat presidential candidates openly support, platforms that they will push to enact for all of America:

“I will be on the front lines in the fight for reproductive freedom, as I have been for decades. I’m running so that I can be a voice for women in New Mexico and in District 1 who feel like they have been sidelined – when it comes to reproductive freedom and access to contraception, the attack on women needs fierce, organized opposition. I will be there and I’m ready to take on the Administration and any judicial nominee who would threaten our access to abortion.”