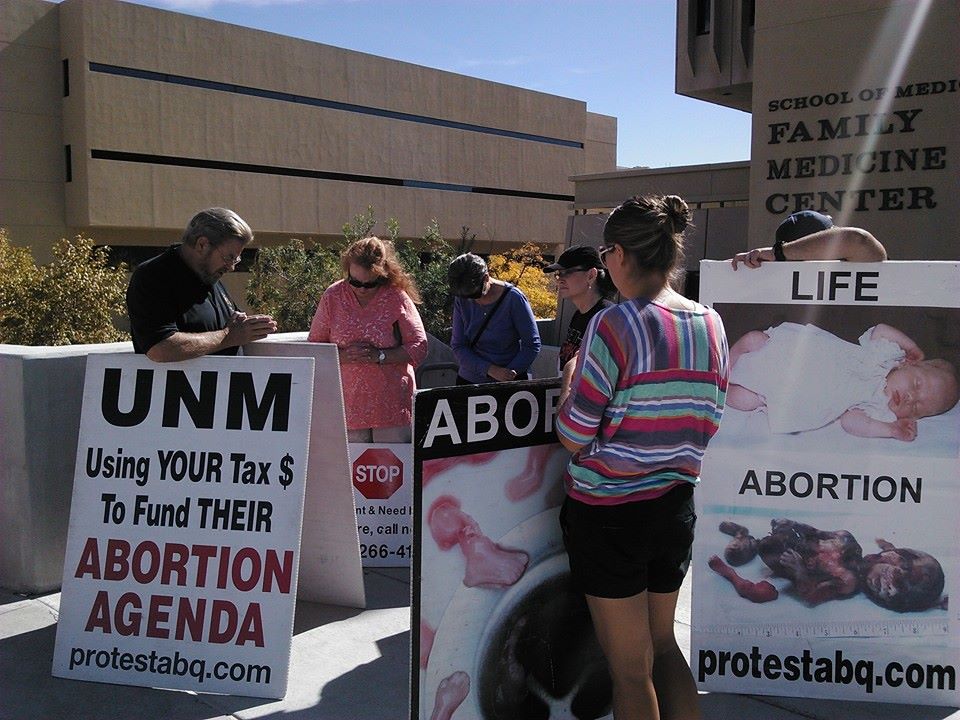 This month we have continued to put the pressure on UNM through protest and public awareness. We also educated the masses who came to ABQ for the International Balloon Fiesta through protests primarily at Plaza Inn hotel which houses Boyd’s late term abortion patients.

Our consistent group of faithful protesters, who are merely trying to be the hands and feet of Jesus, continue to encourage us with their passion and participation in various outreaches. Thank you to everyone who stands with us in prayer, support and encouragement!

Sometimes the fruit of our efforts is SIMPLY being the catalyst for a conversation about abortion. When abortion is brought to light in any public way, especially through the media, WE ALWAYS WIN! Abortion is after all…indefensible.

This month, unexpectedly, our steadfast and faithful efforts have caused both a local…and a national storm! The whole city was buzzing about a sign  that has been used outside of the the late term abortion clinic for 4 years. The local news media even covered the story and we thought the coverage was fair.

Several other Christian and secular media covered the story as well. People are talking about and considering their position on abortion as a result. God is good and always at work.

In the News This Month:

On a national level, the Protest ABQ efforts reached a pro-abortion journalist for COSMOPOLITAN who wanted to write a piece about governor Martinez being a potential GOP candidate in 2016. We’ve included the article below and praise God with us for the fairness of the article in light of the author.

Click here to read the SURPRISINGLY fair and hard-hitting article by COSMOPOLITAN: New Mexico governor Susana Martinez has come under fire from anti-abortion groups for not doing enough to help their cause.

Our continued faithful efforts of prayer, protest, and outreach at late-term abortion clinic Southwestern Women’s Options stirred quite the conversation this month…both Locally and Nationally!

…More News From this Month:

Thank you for your continued prayers, support and encouragement! We are so blessed and humbled by all of our partners in this ministry to save lives here in Albuquerque, New Mexico.

Keep our efforts in your prayers as we continue to move forward to end abortion in New Mexico…to God alone be the glory!

Because of Christ we stand,
Bud and Tara Shaver
Pro-Life Missionaries
www.prolifewitness.org